Amazing How Self Interest Can Motivate the Search for Truth: David Perdue, Candidate for Gov. of Georgia, and Former Candidate for US Senate in the State of Georgia, sues Georgia’s Fulton County Over Claims of Election 2020 Fraud 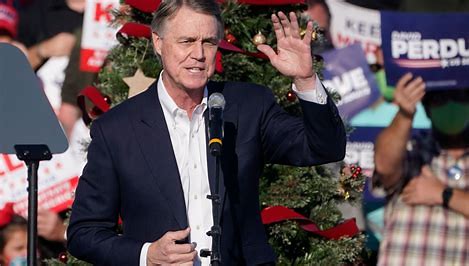 Perdue, who announced his campaign for governor this week, lost reelection to the Senate in Georgia in 2020

Georgia Republican David Perdue, who recently jumped into the upcoming GOP primary field for the state governorship, has joined a lawsuit claiming that fraudulent ballots were counted in Fulton County during the 2020 election.

The former senator has maintained that, had he been governor, he would not have certified Georgia’s 2020 results. Former President Trump is backing Perdue’s bid, which is a direct challenge to GOP incumbent GOP Brian Kemp, who Trump has repeatedly admonished for being “very weak” on “election integrity.”

Elizabeth Grace Lennon, a Fulton County voter, and Perdue have filed to examine paper ballots and other voting materials that they say will prove there was fraud. Though, the suit does not seek to overturn the results of the election, which saw Georgia give its 16 electoral votes to Joe Biden.

“I want to use my position and legal standing to shine light on what I know were serious violations of Georgia law in the Fulton absentee ballot tabulation.  We are asking a judge to consider the evidence after our forensic examination of the absentee ballots is completed and hold those persons responsible who engaged in this wrongful conduct,” said Perdue via his attorneys.

The suit is similar to the one dismissed in October by Henry County Superior Court Judge Brian Amero because, he argued, the plaintiffs had not alleged a “particularized injury.” Lennon and Perdue, who have requested Judge Amero, believe they have standing to pursue particularized injury claims.

Perdue claims that he was a candidate for reelection who failed to earn a majority of the vote, forcing him into a runoff with now-Senator John Ossoff, which Perdue lost. Lennon says she attempted to cast an in-person early vote in October of 2020 and was told she had already voted by mail.

“David Perdue is so concerned about election fraud that he waited a year to file a lawsuit that conveniently coincided with his disastrous campaign launch.  Keep in mind that lawsuit after lawsuit regarding the 2020 election was dismissed in part because Perdue declined to be listed as a plaintiff,” said Kemp spokesperson Cody Hall.