Horrific News, Stalinism is now Here: The ‘Brownshirts’ are Coming 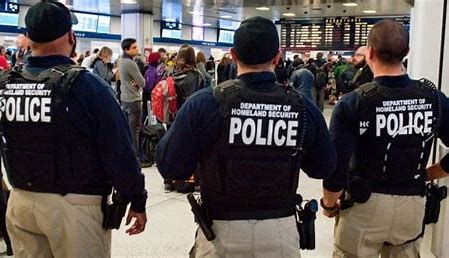 Democrats Are Turning ‘Homeland Security’ Into A Political Weapon

At the behest of partisan Democrats, the organization created to protect us all from another 9/11 will now turn its forces and energy on American civilians.

When a former FBI assistant director for counterintelligence says directly into a camera that fighting terror may now mean arresting members of Congress, the blood sport of politics has been taken to a new and more dangerous level.

Speaking on MSNBC recently, Frank Figliuzzi opined to Chuck Todd that: “Arresting low-level operatives is merely a speed bump, not a road block. In order to really tackle terrorism … and this time domestically … you’ve got to attack and dismantle the command-and-control element of the terrorist group, and unfortunately, and I know this is painful to hear … that may mean people sitting in Congress right now, people in and around the former president.

It is the stuff of banana republics when political opponents are locked up, and this was urged not by a fringe activist on an obscure YouTube channel, but by a former high-ranking U.S. intelligence official on the second-most-watched cable news network, with no gasp from the host. Is this what “homeland security” has become?

Clearly, much has changed since 9/11, when President George W. Bush instituted a new office to “secure the United States from terrorist threats of attacks” that eventually became the Department of Homeland Security (DHS). With a $40 billion budget and more than 240,000 employees, it is now a behemoth eclipsed in size only by the departments of Defense and Veterans Affairs.

Although established with noble purpose, there is growing evidence that its focus has evolved in a direction those voting for its creation never imagined. Those with the secret clearances and shiny badges are increasingly scrutinizing our homeland, not for external attackers, but our own people.

In his first address to Congress, President Joe Biden cited “white supremacist terrorism” as the “most lethal terrorist threat to the homeland today.” This scripted message is being driven by other key Biden administration officials, including Attorney General Merrick Garland, who testified to the Senate Appropriations Committee that: “Domestic violent extremists pose an elevated threat in 2021 and in the FBI’s view, the top domestic violent extremist threat we face comes from racially or ethnically motivated violent extremists, specifically those who advocate for the superiority of the white race.”

Joining him in that assessment was Homeland Security Secretary Alejandro Mayorkas, the primary official charged with protecting our nation from terror. Neither official mentioned the race riots involving Black Lives Matter and Antifa last year that cost a record $2 billion in estimated insurance losses. Nor did they voice concern over the incessant “death to America” chants from the Middle East, the region that produced the 9/11 attackers. No, suddenly whatever Democrats consider “white supremacy” is our number one security threat.

It would be easy to chalk this phony claim up to mere political rhetoric. After all, racial strife has long been a favorite tool of the Democrat Party, and their calculus has been consistently simple: create more anger to drive voters to the polls. But this isn’t politics as usual. Their comments belie a much deeper and insidious intent, now evidenced by concrete policy actions.

The White House just released its “National Strategy for Countering Domestic Terrorism,” a four-pillared approach to identifying and eliminating domestic violent extremism (DVE) threats. Despite its stated claim of protecting civil liberties, there are clear risks within.

The press release notes that “private sector partners” will be used to identify early threats via “credible non-governmental analysis.” Who are these partners? We don’t know. Perhaps the Southern Poverty Law Center, armed with their list of “hate groups” that has routinely included well-known Christian organizations such as Family Research Council and the American Family Association for their stance on LGBTQ issues. Could Black Lives Matter be a partner in identifying white supremacists?

Will Jack Dorsey and Mark Zuckerberg will help out with the plan to “address online terrorist recruitment … through increased information sharing with the technology sector,” offering up lists of radicals who lean the wrong way on Second Amendment rights, abortion, or the integrity of the 2020 election? How exactly will they “foster digital literacy, ” and is that a euphemism for content control?

Will Google help “develop new multilateral solutions to eliminating terrorist content online,” and how will “safeguarding the freedom of online expression” be achieved? Inquiring minds want to know.

The White House also instructs the Department of Defense to incorporate “training for servicemembers separating or retiring from the military” to ensure they aren’t susceptible to recruitment by “violent extremist actors.” Who are these violent groups? Again, they don’t say.

We have a hint, though, as white supremacists and “anti-government or anti-authority violent extremists” are cited as the “two most lethal” threats. Although the only white supremacists most Americans will ever see in action are the ones jumping off a bridge ahead of the Blues Brothers’ speeding car, there’s no doubt which political group generally holds views critical of the government. Conservatives, beware—veterans, in particular.

The press release also references the goal of “stemming the flow of firearms to individuals intending to commit acts of domestic terrorism.” How will we know who is “intending” violence? Could it include those dangerous folks deemed “anti-government,” the ones pissed off about open borders, high taxes, crazy spending, and countless other issues—opinions once covered under the First Amendment? Better think twice before putting that “Don’t Tread on Me” sticker on your truck.

DHS previously announced a new Center for Prevention Programs and Partnerships (CP3) that will fit hand in glove with the Biden plan. With help from Big Tech and academics, it will conduct behavioral assessments on American citizens—without their knowledge.

As unbelievably surreal as it sounds, a pattern of political posts on social media, monitored and reported by government contractors, may soon put offenders under federal scrutiny for suspicious activity. As Harsha Panduranga of the Brennan Center for Justice noted: “A lot of these characteristics that we’re talking about are shared by millions and millions of Americans: social isolation, having a grievance, whatever that means … It really could capture broad swaths of the US population.”

Monitoring the U.S. population, searching for those with grievances. It’s hard to imagine a more open door for a Pandora’s box of civil rights violations. At the behest of partisan Democrats, the organization created to protect us all from another 9/11 will now turn its forces and energy on American civilians.

The political inquisition has also been pushed by Democrats in Congress who sought a “January 6 Commission” in the style of the “9/11 Commission” to investigate what they’ve termed an “insurrection.” Federal law enforcement has already pursued every man, woman, and perhaps a few dogs and cats that entered the Capitol that day, with more than 500 arrested thus far under a “shock and awe” approach that has left many confined in maximum security conditions, including some who simply entered the Capitol.

But Democrats wish to craft the image of their political opponents as radicals more dangerous than the Islamic fundamentalists who hijacked four airplanes on 9/11. Senate Republicans were able to kill the bill, but not its ultimate goal. Democrats won’t give up. And they won’t spare any group from ideological scrutiny, not even the military or DHS.

Surely, none of this was contemplated by President Bush when he signed the legislation making DHS a federal agency. How could he have known that our most powerful law enforcement and intelligence agencies would one day be employed for political purposes? Who would’ve guessed that FBI, CIA, and DNI chiefs empowered to protect our nation would use those powers to attempt to remove a duly elected president with an elaborate hoax?

We’ve had warnings. In 2013, former CIA employee and National Security Agency subcontractor Edward Snowden exposed the NSA’s abuse of powers entrusted to it under the Patriot Act. The agency’s mass surveillance of private citizens and companies was stunning.

Was it all for national security? Not even close. The agents were found spying on their love interests, a tactic affectionally called “LOVEINT.” They also tracked the personal and sexual activities of people they called “radicalizers,” to discredit them.

“Homeland security” has quickly become a system that can neither be trusted to enforce nor obey the law, nor be penalized for its own malfeasance. Its apparently unfireable leaders carry on with impunity, despite perjuring themselves before Congress, falsifying documents for a FISA court, unmasking communications without clear justification, and illegally spying on American citizens without a warrant. Perfect knowledge and unrestrained power have made a dangerous cocktail.