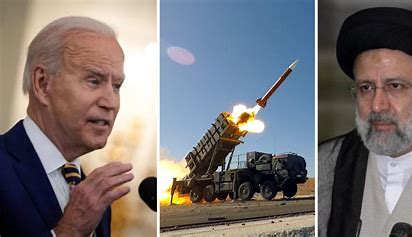 As an election in Iran signals that the going will get even tougher in the Middle East, some protection offered to American allies is going away.

Eight Patriot anti-missile batteries are being yanked out of nations that include Iraq, Kuwait, Jordan and Saudi Arabia,  The Wall Street Journal reported Friday.

Further, it reported, an anti-missile system known as a Terminal High Altitude Area Defense is being pulled out of Saudi Arabia.

U.S. fighter squadrons based in allied nations are also being reuduced.Trending:Tragedy in Alabama: Nine Young Children, One Adult Dead After ‘Most Horrific Accident’ in County History

As missile systems and aircraft depart the region, the numbers of American troops based there will also fall.

Pentagon spokeswoman Cmdr. Jessica McNulty said some missile units and other military assets will shift back to the U.S. for maintenance, while other assets will be redeployed to other regions, according to a CNN report Friday. McNulty did not say where the assets would go.

“This decision was made in close coordination with host nations and with a clear eye on preserving our ability to meet our security commitments. It’s about maintaining some of our high-demand, low-density assets so they are ready for future requirements in the event of a contingency,” McNulty said.

The Biden administration has pinned its Middle East policy hopes upon convincing Iran to sign a new version of the nuclear agreement signed in 2015 when President Joe Biden was vice president in the Obama administration.Is Joe Biden a danger to world peace?Yes No
Completing this poll entitles you to The Western Journal news updates free of charge. You may opt out at anytime. You also agree to our Privacy Policy and Terms of Use.

But even as the Pentagon announced the missile system withdrawals, Iran elected hard-line judiciary chief Ebrahim Raisi as its president on Friday, according to The Associated Press.

The election wasn’t exactly a landslide. Raisi’s strongest competition were ruled ineligible to run, the AP reported, and the vote saw the lowest turnout on record.

Only about half of the country’s 60 million elible voters turned out, according to the AP. And even among voters, the AP reported, “some 3.7 million people either accidentally or intentionally voided their ballots, far beyond the amount seen in previous elections and suggesting some wanted none of the four candidates.”

Raisi, 60, was sanctioned by the U.S. for his involvement in the execution of thousands of political prisoners in 1988, the AP reported.

“Raisi’s ambivalence about foreign interaction will only worsen the chances that Washington could persuade Tehran to accept further limits on its nuclear program, regional influence, or missile program, at least in Joe Biden’s first term in office,” wrote Henry Rome, an analyst at the Eurasia Group who studies Iran, according to the AP.Related:Nine More States to End Pandemic Unemployment Bonuses on Saturday

“That Ebrahim Raisi has risen to the presidency instead of being investigated for the crimes against humanity of murder, enforced disappearance and torture is a grim reminder that impunity reigns supreme in Iran,” the statement said, according to the AP.

McNulty told the media that the U.S. redeployments do not leave the region defenseless.

“The Defense Department maintains tens of thousands of forces in the Middle East, representing some of our most advanced air power and maritime capabilities, in support of US national interests and our regional partnerships,” McNulty said, according to the Times of Israel.

In September 2019, the U.S. beefed up Saudi Arabia’s missile defenses after threats from groups linked to Iran. It bolstered missile defenses in Iraq after an American missile strike killed Iranian Gen. Qasem Soleimani in January 2020.