Gaza Crisis: Casualties Pile Up with no Signs of Ceasefire from Israel, Hamas 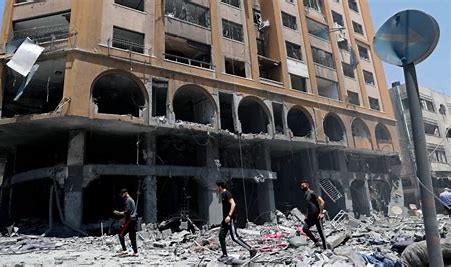 Tel Aviv — With Israel and Hamas now engaged in their most destructive fight in seven years, the Biden administration is dispatching a State Department official to join the de-escalation efforts.

The latest: The Israeli air force attacked a meeting of senior Hamas military leaders on Wednesday in Gaza and reported it had killed the Gaza City Brigade commander and the heads of Hamas’ cyber arm and weapons research and development department, along with at least three other senior officials.

The fighting intensified overnight, with Hamas and other militants firing over 100 rockets toward Tel Aviv and other nearby cities, and Israel continuing its air campaign in the Gaza Strip by destroying high-rise buildings, Hamas facilities and rocket units.

What they’re saying: “Israel is not preparing for a ceasefire. There is currently no end date for the operation. Only when we achieve complete quiet can we talk about calm. We will not listen to moral preaching against our duty to protect the citizens of Israel,” said Israeli defense minister Benny Gantz.

Behind the scenes: The Biden administration is trying to work with Egypt to push for de-escalation, U.S. and Israeli officials told me.

The big picture: The Israeli-Palestinian conflict had been a low priority in President Biden’s early months, but once a crisis erupted, the administration found itself understaffed.

The state of play: Egyptian and UN mediators are talking to both parties, but were rebuffed by the Israeli government when they raised the possibility of a ceasefire, Israeli officials tell me.”

“We’re escalating towards a full-scale war. Leaders on all sides have to take the responsibility of de-escalation. The cost of war in Gaza is devastating. Stop the violence now.”

One thought on “Gaza Crisis: Casualties Pile Up with no Signs of Ceasefire from Israel, Hamas”