Election Officials in Fulton County, Georgia Sure Act Like They Have Something to Hide 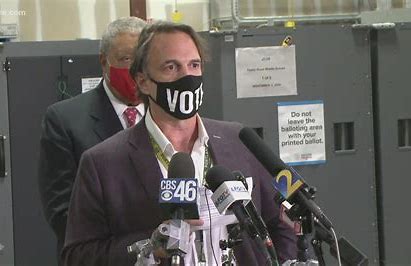 Last week, We reported on the developments in post-election litigation underway in Fulton County, Georgia, in which plaintiffs had obtained an order from a Georgia State Court judge giving them the authorization to inspect copies of 145,000 mailed-in absentee ballots from the November 2020 election.

Judge Amero has ordered that high-resolution copies be made of the 145,000 absentee ballots, while the originals will remain in the custody of election officials. But the copies should allow the plaintiffs to look for certain kinds of possible irregularities such as whether any ballots were machine marked and then copied in large numbers. Mailed-in absentee ballots should all be hand-marked by the voter.

The lawsuits are being opposed by officials of Fulton County, but Georgia Secretary of State Brad Raffensperger — who professed over and over again that the outcome of the Georgia Presidential election was was free of fraud — applauded Judge Amero’s decision.

In a statement, Raffensperger cited “a longstanding history of election mismanagement” in Fulton County.

“From day one I have encouraged Georgians with legitimate concerns about the election in their counties to pursue those claims through legal avenues,” Raffensperger said. “Fulton County has a longstanding history of election mismanagement that has understandably weakened voters’ faith in its system. Allowing this audit provides another layer of transparency and citizen engagement.”

A little more than a week has now passed since Judge Amero’s order, and some disconcerting events have transpired during that time.

Judge Amero’s order specified that the plaintiffs would be allowed to inspect high-resolution copies of the 145,000 ballots, but that the original ballots would remain in a secured county facility. The details of the copying and inspection were to be worked out between the parties and the court.  In granting the motion to inspect the ballots, Judge Amero noted that no party had asked that the complaint be dismissed.

But after Judge Amero’s Order, on May 26 Fulton County filed a motion to dismiss the complaint.  In addition to claiming that Fulton County itself should not be subject to the complaint since the elections were run by the County Board of Elections, Fulton County also alleged the plaintiffs failed to comply with the statutory requirements for filing an “election contest,” and on that basis, the complaint should be dismissed.

Judge Amero had scheduled a meeting at the ballot storage warehouse to take place on May 27. In response to the motions filed on May 26, Judge Amero postponed the meeting.   He stated that the motions must be resolved prior to the court granting access and inspection to the ballots.

That is where the court proceedings stood as of last Friday.  But that isn’t all that happened.

On Saturday, May 29, at approximately 4:30, an alarm went off at the warehouse facility where the original ballots are stored in a locked room  Security responded — more on that below — and found the warehouse door unlocked and open.  The storage location is at 1365 English Street, in Atlanta, which is the address for the “Fulton County Election Preparation Center.”

According to the website CreativeDestructionMedia.com, it conducted an interview with the attorney for the plaintiffs, Robert Cheeley regarding the events leading up to the alarm on Saturday.

To end the petty squabble, Judge Amero asked Cheeley to have his off-duty security park on the public street in front of the facility and not park in the parking lot.

Starting on May 25, Fulton County began to have two on-duty Fulton County Sheriff’s Deputies provide security for the storage location pursuant to Judge Amero’s order that they provide 24/7 security of the ballots until they were copied and inspected.

The alarm was noticed by the off-duty private security sitting in their car on the street.  They went to investigate and found the door unlocked and open.

According to Cheeley, it wasn’t until 8:00 pm that a Fulton County official arrived that the location to lock the door — a key was required to do so.

Cheeley received an email from an individual named Bob Ferguson, who seems to be connected to Fulton County or the Sheriff’s Office based on the contents of the email:

[h/t to Emerald Robinson and Newsmax who have been on this story since it first broke on Saturday].

May 22 and May 29 were both Saturdays, and the alarm went off both days.  If you look closely at pictures of the door, you can see there is no knob or handle on the inside, with only a deadbolt knob above the handle area of the door.  There is likely only a handle on the outside, without a latching mechanism, and the deadbolt on the outside is turned with a key.  If the deadbolt is not turned to the locked position, the door can simply be pulled open.

Cheeley said in his interview that he intends to file motions for contempt of court this week with respect to the County’s failure to comply with the Court’s order that the ballots be kept in a secured location.  Whether or not anything actually happened with regard to the ballots stored inside is likely a question that won’t be answered until the motions filed by the County are resolved.