Either Totally Dumb of Politics or Twisted Left Wing Ideologues: These Orthodox leaders in Queens are the first to endorse Hochul 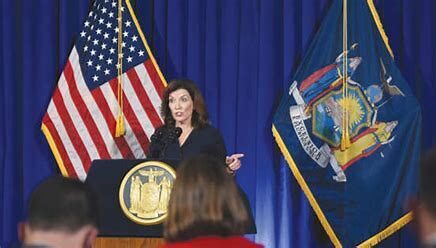 The list released by the Hochul campaign Thursday included Christian, Jewish and Muslim clergy and activists. The campaign called it the largest ever faith-based coalition to endorse a gubernatorial candidate in state history.

The only Jewish endorsers listed are the Orthodox rabbis and community leaders from Queens. The list does not include representatives of non-Orthodox denominations, nor Orthodox rabbis from Brooklyn and other areas whose large Orthodox voting blocs are coveted by candidates.

A source close to the Hochul administration told the New York Jewish Week that the list is a starting point and that “many more” Jewish leaders support Hochul, who became governor in August following the resignation of Andrew Cuomo.

In regards to the Orthodox community of Brooklyn, the source said that the governor is planning to do more outreach there in the weeks to come.

One of the rabbis on the list, Baruch Rothman of Yeshiva Ateres Shimon in Far Rockaway, said that Hochul is a leader who listens to the concerns of his community.

“She shares our Jewish values of promoting equality and civil rights as well as standing up for what is right,” Rothman said in a statement. “I look forward to working with Governor Hochul to promote the ideals of the Jewish community in the years to come.”

Rabbi Moishe Indig, an activist with the Satmar Hasidic community in Brooklyn, said that the fact that no Satmar leaders were on the list “does not mean we are not endorsing her.”

Indig added that Hochul is a friend to the community and thinks that “she’s doing a great job.”

“She came in during a difficult time,” Indig said. “After COVID, the entire world went down. She’s working hard to put things back together.”

In a statement, Hochul said that she is “humbled and honored” over the endorsements and will continue to partner with faith leaders throughout the state.

Hochul is gearing up for the Democratic primary in June. Her likely Democratic rivals will include U.S. Rep. Tom Suozzi, a moderate from Long Island, and NYC Public Advocate Jumaane Williams, a progressive.

U.S. Rep. Lee Zeldin, the Jewish Republican from Long Island, is seeking his party’s nomination for governor. He recently released a poll which he says shows that he has a viable chance of winning the election.

Cuomo, who reluctantly quit the governorship amid a swirl of sexual harassment allegations, has also hinted he might make a run for his old office.

Also endorsing Hochul were Rabbi Nathan Goldberg of Young Israel of Holliswood in Jamaica and Joshua Glikman, whose affiliations were not available.

3 thoughts on “Either Totally Dumb of Politics or Twisted Left Wing Ideologues: These Orthodox leaders in Queens are the first to endorse Hochul”