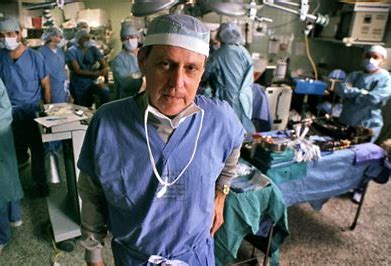 Dr. Paul Marik, a doctor at the center of a Virginia lawsuit against a health care employer that banned the use of certain kinds of medicine to fight COVID-19, told The Daily Wire in an interview Tuesday that his case is fundamentally about the ability of medical physicians to care for their patients as they see fit based on their expertise. In other words, it’s about “letting doctors be doctors.”

Dr. Marik practices at Sentara Norfolk General, in Norfolk, VA. He is is a founding member of the Front Line COVID-19 Critical Care (FLCCC) Alliance. He is also the chief of pulmonary and critical care medicine at Eastern Virginia Medical School.

Marik is one of the leading experts on the “MATH+ method” for treating patients with COVID-19. But, Sentara Healthcare recently banned doctors’ ability to prescribe medicines required for use in MATH+.

Marik feels that decision violates the patients’ rights to explore these methods and the doctors’ rights to prescribe such a procedure.

As reported by MedPageToday.com, Marik filed a complaint against Sentara Healthcare in Virginia on November 9 over its ban of certain treatments for COVID-19.

Marik told the Press that he felt a memo that Sentara Healthcare sent to its entire healthcare system was personally targeting him by stating that Sentara was only allowing Remdesivir to be prescribed for COVID-19 treatment and that other “alternative” medicines—such as Fluvoxamine—were now banned.

Marik has prescribed Fluvoxamine to his patients. “Numerous studies, peer-reviewed in outlets like The Lancet and JAMA , show that FDA repurposed drugs such as Fluvoxamine are beneficial to patients with COVID,” he told The Daily Wire.

Marik has been using inexpensive, generic drugs to help treat COVID-19 when he sees it as appropriate.

Despite his employer’s ban, Marik insists this is a safe practice and within his right as a physician to give FDA-approved drugs to his patients if necessary to help them heal.

“The FDA allows doctors to prescribe approved off-label, cheap drugs for patients as they see fit. Prior to COVID, this was common practice. With COVID, all these standards have gone out the window,” Marik told The Daily Wire.

The FDA’s website states the following about approved off-label drugs for unapproved purposes:

“From the FDA perspective, once the FDA approves a drug, healthcare providers generally may prescribe the drug for an unapproved use when they judge that it is medically appropriate for their patient.”

Critics have asserted that Marik has been prescribing Ivermectin, which he says is not true.

“I never was allowed to prescribe Ivermectin in the first place, so how could it be about Ivermectin?” he posited in response to those who say Ivermectin does not work and should be banned. “This is about doctors being allowed to make decisions based on their conscience and medical training.”

Marik sought the court’s intervention to allow him to continue practicing medicine as he sees fit. Despite the court not granting Marik an injunction against his employer,  Marik remains hopeful that some good will come from the case.

“[The Judge] was not a medical doctor and was totally confused,” Marik asserted.  “We didn’t get the injunction, but we have other avenues. Hopefully, this has generated public awareness to foster change.”

“We need to let doctors be doctors. They’re the ones caring for patients and taking on the responsibility. They’re the ones who can be sued. Doctors should be able to decide for themselves the best treatment,” he said.

“Now, we have the Federal government and hospitals trying to tell doctors how to work,” he continued. “This is an aberration of the Hippocratic principle of medicine and takes decision making away from the individual and the doctors.”

Sentara defended their actions in the following statement, according to MedPageToday.com:

“Sentara generates treatment guidelines by engaging multi-disciplinary groups of clinicians to review literature, care standards and provide expert advice,” the statement continued. “In most situations, physicians are able to deviate from guidelines to individualize care for patients. However, in some scenarios, treatments that may potentially harm patients or that are widely considered to be outside the standard of care may be limited.”

Still, Marik told local media that in his judgment as a medical doctor the data showed his protocol was “saving lives.”