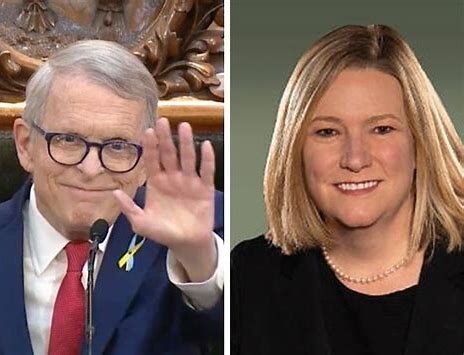 Ohio Gov. Mike DeWine (R) won the Republican primary on May 3 and will face Democrat Nan Whaley in the Nov. 8 general election.

DeWine, 75, the incumbent in the race, and his lieutenant governor Jon Husted, received 49 percent of the votes, according to unofficial results released by the Ohio Secretary of State’s Office shortly before 11 p.m. on Tuesday. Jim Renacci and Joe Knopp finished came in second with 28 percent of the vote.

Whaley, the former Mayor of Dayton, and her running mate defeated former Cincinnati Mayor John Cranley and his lieutenant governor pick 65 percent to 35 percent, according to the unofficial results.

Echoing the words from his State of the State speech in March, DeWine said, “We want to finish the work we started.”

DeWine thanked the voters for their confidence and support, and in part, said that every day, no matter whether children were in Appalachia or the cities, he and Husted worked on providing them the opportunity for all of them to live up to their God-given potential.

Cranley conceded around 9 p.m. Tuesday, saying he knows “all of this is God’s plan.”

Whaley was elected as Dayton’s mayor in 2013, running unopposed in 2017—the first time in city history a mayoral race ran uncontested.

“Ohio is at a crossroads. We need a governor who is tough enough to stand up for what’s right and build a state where we can all thrive,” Whaley, 46, said.

In Ohio’s last 50 years, there have been six Republican governors, and three Democrat governors. DeWine defeated Democrat Richard Cordray by 50.4 percent to 46.7 percent to win the governor’s race in the 2018 election. It was the largest voter turnout in Ohio for a governor’s race, according to the Ohio Secretary of State’s Office.

The May 3 Primary Election marked the first time since 1978 that an incumbent governor faced a challenger. DeWine’s faced three.

DeWine blocked a proposed amendment to a sports-related bill that would have served as a safeguard to prevent boys from playing on girls’ sports teams.

Eliminating transgenderism, critical race theory and social emotion learning courses from public schools remains a hot-button issue in Ohio. The topics receive the strongest reaction from the crowd when former President Donald Trump brought them up at the rally in late April.

As the state is facing an onslaught of critical race theory and cancel culture being pushed in its public schools amid the growing concern of parents, DeWine would not say whether he would put an executive order in place to stop it.

Although DeWine has the most cash in his campaign coffers, he also is contending with a spirited race and constituents’ discontent.

DeWine had more than $9.2 million in his campaign account as of April 18, after he accepted $3.3 million in donations between Aug. 1, 2021 and Jan. 31, according to newly released campaign finance records from the Ohio secretary of state’s office the week of April 18.

The incumbent’s campaign received checks of $10,000 or more from 120 different donors and almost $521,000 in in-kind contributions from the Ohio Republican Party.

The last challenger to campaign against an incumbent governor was former Republican State Representative and Ohio Speaker of the House Charles Kurfess when he decided to run against Gov. Jim Rhodes.

Rhodes, a popular governor, beat Kurfess by more than twice the margin 68 to 32 percent, according to the Ohio Secretary of State’s Office.

Kurfess said he believed that DeWine was faced with some issues and decisions that made him vulnerable to challengers, and would’ve been surprised if DeWine would’ve been defeated.

“It’s unusual for an incumbent to face a challenger, but not surprising to me that Mike DeWine was facing some opposition,” Kurfess said. “Mike DeWine has been in that arena where he’s had some unpopular issues come up where he’s had to make some unpopular decisions. Things are a lot different now than they were in Ohio and Washington when I was in office. The issues are more emotional, and the political environment is much more partisan.

“Whether it’s been the issue of abortion, gun laws, how he handled COVID and the critical race theory and transgender issue in schools, those issues alone could have caused someone to run against him,” Kurfess added. “That’s because there are enough people out there who have expressed their public opinion that would lead candidates to believe they could beat him.”