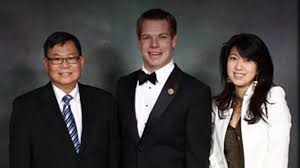 House Speaker Nancy Pelosi is leaving Rep. Eric Swalwell on the House Intelligence Committee, she announced on Friday, despite the California Democrat’s close contacts with an alleged Chinese spy.

Swalwell for years maintained contact with Christine Fang, a Chinese national who the FBI determined was working covertly as an intelligence agent for the Chinese Ministry of State Security.

Axios reported in December that Fang raised money for Swalwell’s 2014 congressional campaign and arranged for an intern to work for the lawmaker.

Swalwell, who was elected to Congress in 2012, has refused to discuss details of his interactions with Fang. He has declined to say whether he had a personal relationship with the alleged foreign agent.

The FBI provided a defensive briefing to Swalwell about Fang in early 2015, after he was first appointed to the House Intelligence Committee.

Fang, who came to the U.S. in 2011, developed close contacts with other California lawmakers, including California Rep. Ro Khanna. She became politically active in Asian-American student groups after enrolling at San Francisco University, East Bay.

Axios reported that Fang had sexual relationships with at least two mayors from cities in the Midwest.

House Republicans have called for Swalwell to be removed from the House Intelligence Committee, which handles highly classified material as part of its oversight of the intelligence community. House Minority Leader Kevin McCarthy requested and received a briefing from the FBI about the contacts between Swalwell and Fang.

McCarthy said after the briefing that Swalwell should be removed from the Intelligence Committee.

“The American people elected a Democratic House Majority that would be relentless in our work to promote their security – both by defending their economic security here at home and our national security abroad,” Pelosi said on Friday in an announcement of the committee members.

“On the Intelligence Committee, these Members will be effective forces in keeping the American people safe, as we confront our nation’s adversaries, adapt to new threats and work with our allies,” she continued.

California Rep. Adam Schiff will remain chairman of the committee.

Swalwell will also continue serving on the House Homeland Security Committee. He was one of the House managers for President Donald Trump’s impeachment trial last month.

One thought on “DemocRATS Bent on Destroying America: Pelosi Leaves Swalwell On Intelligence Committee Despite Past Relationship With Chinese Spy”