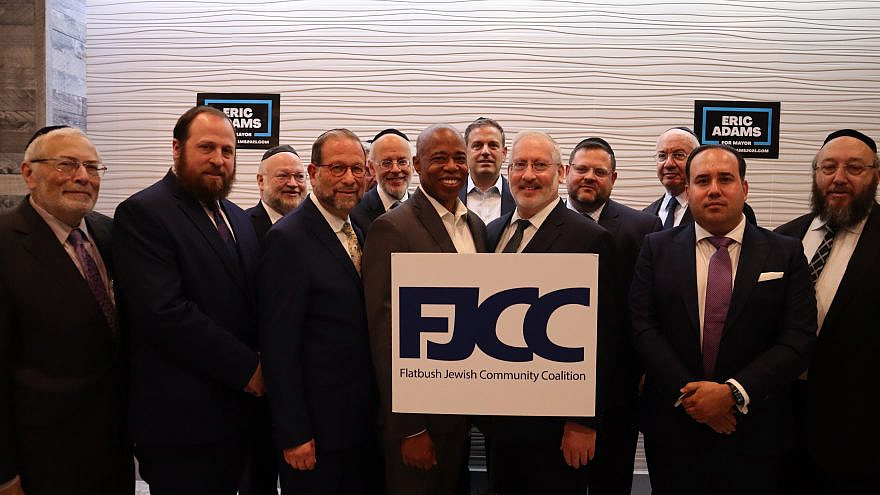 The leadership of the Satmar Chasidim in New York announced that they are backing of Brooklyn Borough president Eric Adams for mayor after previously endorsing his closest competitor former Democratic mayoral candidate Andrew Yang. 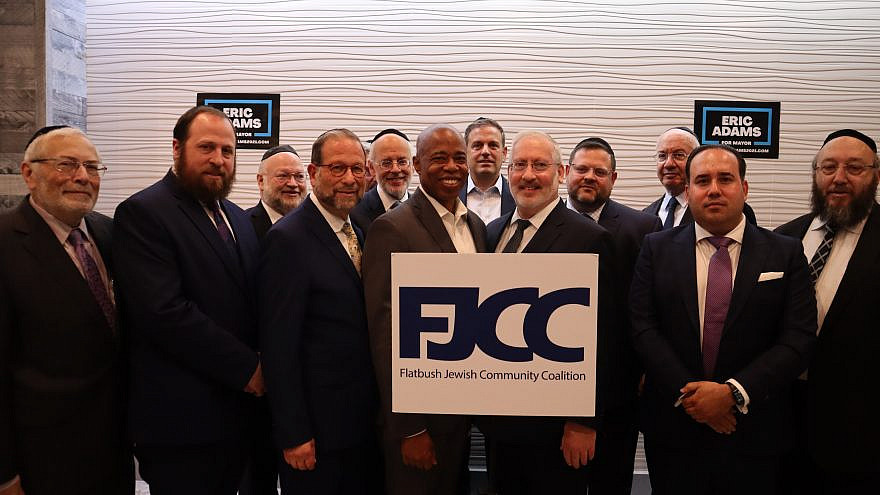 In what some saw a shocking move, the leadership of the Satmar Chasidim in New York announced that they are backing of Brooklyn Borough president Eric Adams for mayor after previously endorsing his closest competitor former Democratic mayoral candidate Andrew Yang.

Adams called the endorsement a “very significant moment” in his political career and one that could bring thousands of votes to his campaign as the community, which is centered in the Williamsburg neighborhood in Brooklyn that tends to vote in a bloc following the recommendation of community leaders.

“Today, receiving their endorsement, they are saying to everyone in the city that those who are elected and stood with us, we are going to stand with them,” Adams said often referring to the Satmar Chassidim as “old friends” who “know me.”

The new endorsement was likely a blow to the campaign of Yang, who on May 27 had retweeted a post from a haredi news blog that showed he had garnered the support of the Satmar community. “I am so deeply honored to have earned the united endorsement of such an incredible group of Jewish leaders. Historic! NYC’s Jewish community is going to be vital in our comeback.

Yang and Adams are two of 13 candidates trying to secure the Democratic nomination for New York mayor in the June 22 primaries. According to a NY1/Ipsos poll of likely Democratic primary voters, Adams has 22 percent of the vote, followed by Yang has 16 percent. Another 16 percent of voters remain undecided. Just a week or so ago, polls showed Yang in the lead.

According to Rabbi Yeruchim Silber, director of New York government relations for Agudath Israel of America, several reasons surround the fact that mayoral candidates are upping their outreach for the Orthodox vote.

“Candidates for office in New York are courting the Orthodox Jewish vote this election cycle, perhaps more than in previous years, and for good reason,” Silber told JNS. “With the increase of anti-Semitic attacks over the past few years and negative perceptions regarding the response to the COVID-19 pandemic, members of the Orthodox and Chasidic Jewish community in New York City recognize the importance of local governance and of elected officials who are sensitive to the needs of the community more than ever.”

“In addition, the rise of ultra-progressive voters—many of whom are openly anti-Israel, pro-BDS and take positions on public safety that are at odds with those of many Orthodox Jews—leaves many feeling that the only way to be heard is through the ballot box,” he continued. “And many of the candidates have responded accordingly.”

According to the haredi newspaper Hamodia, Satmar leaders are saying the announcement isn’t a contradiction of their previous statement. Instead, their announcements merely reflect their top choices, and now, with early voting set to start next week, they are re-ranking them with Adams on top, followed by Yang and the city’s comptroller, Scott Stringer, in third place.

‘Each side is taking a bet on voting for the winner’

Ranking candidates may have a significant impact this year as New York City launches “ranked choice voting,” which means that voters can vote for their top five candidates in order of preference. If no candidate receives more than 50 percent of the vote, the race moves into another round, and the candidate with the lowest number of votes is eliminated. If that candidate’s voters ranked a second-choice candidate, that vote is now active and is tallied. 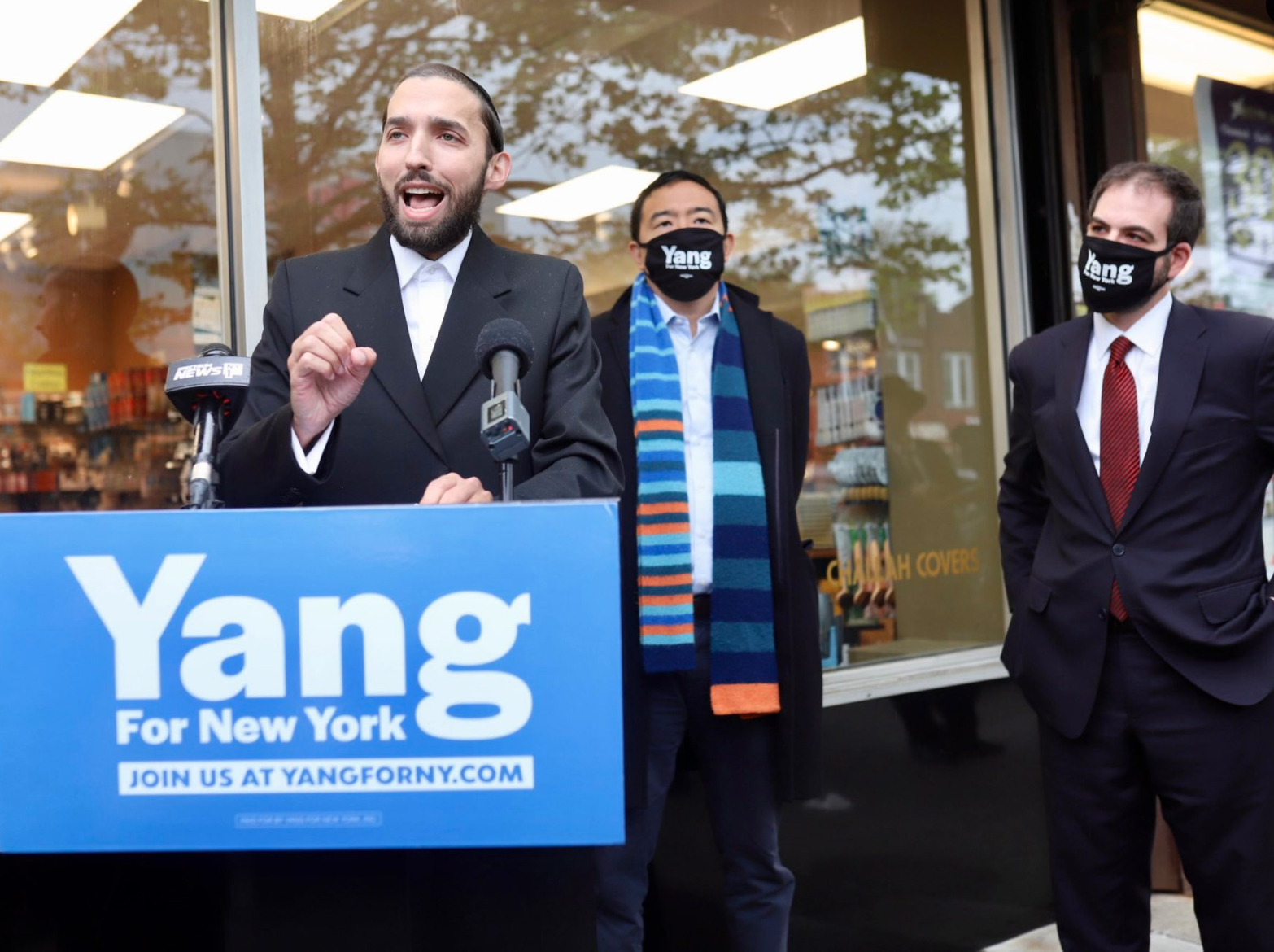 Regardless of whether or not the community seems to be suddenly changing their minds, the endorsement issued this week applies primarily to Satmar Chassidim who follow the leadership Rabbi Aron Teitelbaum, who is based in the Village of Kiryas Joel in Upstate New York. A second faction of Satmar community—the dynasty split after the death of the previous Satmar Rebbe, Rabbi Moses Teitelbaum—follow the leadership of Rabbi Zalman Teitelbaum, whose base is centered in Williamsburg.

“The fact that the followers of each rebbe make different choices is not surprising. Each side is taking a bet on voting for the winner, and therefore being ‘on top,’ ” Samuel Heilman, professor emeritus of sociology and the Harold Proshansky chair in Jewish Studies at Queens College and the Graduate Center City University of New York, told JNS. “But if no one can be certain exactly who voted for which first or second choice, that could quite possibly leave enough uncertainty in the politicians’ minds to keep the entire Satmar community as a political force. That last point is, of course, the bottom line.”

Adams also reportedly has the support of many in the Chabad-Lubavitch community in the neighborhood of Crown Heights in Brooklyn.

“[Adams] is not just another candidate who’s seeking the community’s endorsement. He’s represented the community and had a strong relationship with the community that goes back some 15 years plus,” said Avi Leshes, a community activist. “For the community in particular, their top concerns are public safety, bringing small business back, allowing our yeshivahs to continue to operate and educate uninterrupted, and lastly, addressing the homeless/mental-health crises.”

Back-and forth opinion on recent Israel conflict with Hamas

Interestingly, it is the issue of yeshivahs operating uninterrupted and with less government interference that has some major Chassidic groups in the Borough Park section of Brooklyn throwing their support behind Yang. Among them are the Bobov and Belz Chassidim.

Yang has indicated that he supports yeshivah education and would not press for major changes to their educational curriculums, despite claims that some schools provide extremely limited secular education to their students.

However, he has also come under fire for his flip-flopping of statements regarding the BDS movement and Israel. Most recently, during the 11-day Israel-Hamas conflict in May, Yang tweeted that he “stood by Israel” and “condemned Hamas terrorists” for their rocket attacks. He then received criticism from pro-Palestinian activists, as well as local Rep. Alexandria Ocasio-Cortez (D-N.Y.) who called his statement “utterly shameful” for being overly simplistic and not acknowledging Palestinian suffering.

Following the controversy, Yang issued a new statement saying that he “failed to acknowledge the pain and suffering on both sides.”

Nevertheless, Yang has the endorsement of several Orthodox politicians, including Daniel Rosenthal, a state assemblyman from Queens, and City Councilman Kalman Yeger and State Assemblyman Simcha Eichenstein, both of Brooklyn.

“What Andrew Yang gives more than any other candidate is a reason to believe that our community has a future in this city,” Yeger said during his endorsement of the candidate.