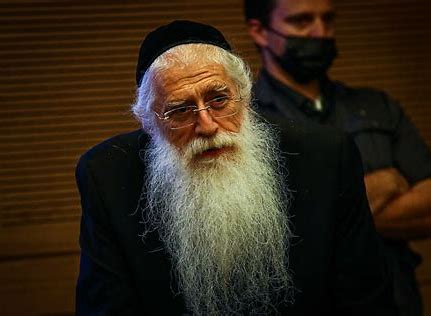 Ultra-Orthodox MK given personal security guards after attack outside home

Knesset Guard Superintendant Yossi Grif decides to increase MK Meir Proush’s personal security following an attack on him this morning outside his home, in which two assailants tried to cut his beard.

Two security personnel from the Knesset Guard will now accompany Porush wherever he goes.

The attackers fled the scene and are still at large.

United Torah Judaism’s Meir Porush, 66, unharmed in the incident outside his home; police search for 2 attackers who fled on scooter

A man tried to cut the beard of MK Meir Porush, a member of the ultra-Orthodox United Torah Judaism party, as the lawmaker left his home in Jerusalem on Monday, according to Hebrew media reports.

The lawmaker, 66, required no medical treatment. Police confirmed the attack on an elected official by two assailants, but did not identify Porush as the victim.

Two men, both in ultra-Orthodox garb, were involved in the attack and were reportedly riding an electric scooter.

One of the men approached the Knesset member and asked if he was Porush, who responded by confirming his identity. The attacker then tried to cut his beard, an aide to the lawmaker told the Haaretz newspaper.

Porush was able to push the man away, according to reports.Get The Times of Israel’s Daily Editionby email and never miss our top storiesNewsletter email addressGET ITBy signing up, you agree to the terms

Police opened an investigation and began searching for the suspects who fled the scene on the scooter.MK Meir Porush, right, in the Knesset, July 14, 2021. (Yonatan Sindel/Flash90)

The motive for the attack was not immediately clear.

Knesset Speaker MK Mickey Levy said in a statement he was “shaken to his core by the ugly and violent attack.”

Levy said he had spoken with Porush to ask after his wellbeing. He also spoke with the Jerusalem District police commander and discussed ways to catch the perpetrators.

“Attacking public figures is an act that is destructive to democracy, and that is how it should be treated,” Levy said in a statement.

Opposition leader MK Benyamin Netanyahu tweeted that he had personally called Porush to inquire after his welfare.

“I call on police to catch those responsible for this violent and dangerous act,” Netanyahu wrote.

More condemnation came from other lawmakers, among them MK Alex Kushnir of the secular Yisrael Beytenu party, which has clashed with the ultra-Orthodox parties on matters of religion and state. The incident, Kushnir tweeted, “is reminiscent of the dark days of Nazi Germany.”

“I hope the culprits are swiftly found,” he wrote. “I am sorry for the terrible experience that MK Porush had.”

During the Holocaust, Nazi soldiers would humiliate Jewish men by roughly cutting off their beards in public.

Ultra-Orthodox extremists have attacked Porush in the past.

In 2018, when he was deputy education minister, Porush was attacked by an angry mob of ultra-Orthodox residents in Beit Shemesh over his support for Israeli draft laws that had increased the quota of ultra-Orthodox men who would serve in the army. Videos of the incident show Porush escaping several dozen men who chased him out of the neighborhood and damaged his car.