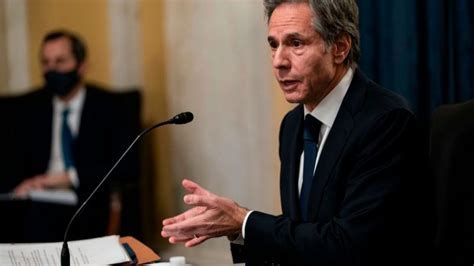 Secretary of State Antony Blinken pointedly declined Tuesday to answer whether he has been interviewed recently by FBI agents investigating Hunter Biden’s and associates’ contacts at the State Department in connection with a Ukraine natural gas company. During congressional testimony Tuesday afternoon over the Biden administration’s bungled Afghan withdrawal, Blinken awkwardly batted away several direct questions from Rep. Scott Perry (R-Pa.) about possible interactions with the FBI.

“I’m not sure what you are referring to, and I am happy to take that up with you offline,” Blinken answered, often halting, when asked the first time.

Perry persisted, “Did the State Department turn over documents to the FBI related to Hunter Biden, Burisma, and/or the Blue Star Strategies firm?”

“You will have to,” Blinken answered before stopping,

“You are saying you did not have an interview with the FBI since becoming Secretary of State?” Perry pressed.

“It would not be appropriate for me to comment in a public forum on any legal proceedings that the department or I may have had,” Blinken answered.

Perry asked again, “I am not asking you to comment on the legal proceedings I’m just asking if you have been interviewed by the FBI since becoming Secretary of State?”

Blinken demurred again: “Again I’m not going to comment one way or the other,” he answered.

Multiple current and former government officials told Just the News that Blinken was recently approached by the FBI but they did not know what came of it. When asked about the FBI approach, the State Department press office referred Just the News to the FBI.

“Thanks for your questions, but we would refer you to the FBI on these questions,” the press office said.

Documents obtained by Just the News from the State Department under a Freedom of Information Act lawsuit show Hunter Biden sought and received a meeting with Blinken in 2015 at the department when Blinken was deputy secretary of state under the Obama administration.

“Have a few minutes next week to grab a cup of coffee? I know you are impossibly busy, but would like to get your advice on a couple of things, Best, Hunter,” Biden wrote in spring 2015.

Blinken responded the same day with an “absolutely” and added, “Look forward to seeing you.”

You can see that exchange here.

Records indicate the two men were scheduled to meet the afternoon of May 27, 2015, although it is unclear whether the meeting took place. But other State Department memos confirm Hunter Biden met with Blinken for lunch on July 22, 2015, at the State Department.