Behind the Scenes: When Biden Knelt before Rivlin’s Haredi Aide 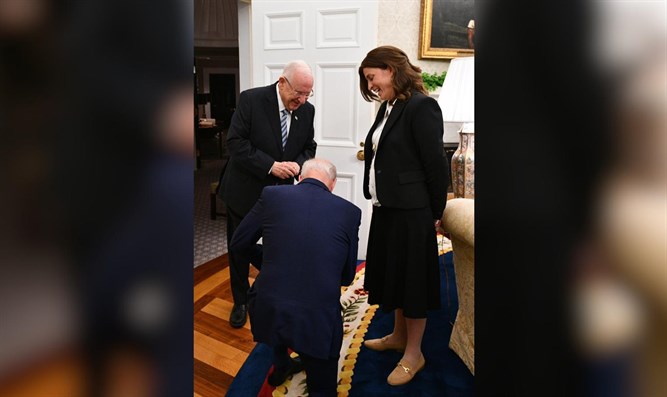 Rivka Ravitz recounts moment US president knelt before her upon learning she has 12 children, Last week, US President Joe Biden kneeled before Rivka Ravitz, the chief of staff and bureau chief of Israeli President Reuven Rivlin, upon hearing that she had 12 children, in an image that has gone viral.

“I had the privilege of meeting three American presidents up close. I met Obama in the Oval Office, Trump here in Jerusalem and now Biden. It is difficult to explain the feeling when the president of the world’s great power is kneeling in front of you and bowing in honor. After getting up, Biden told me: ‘I have a picture of my mother here, you must see who she was,’ and he showed me a picture of his mother. I was in shock, but then I made some order in my thoughts:,” Ravitz told Channel 12 News correspondent Sivan Rahav Meir.

“I went back to my grandmother, who came at the age of 3 as an refugee from Europe to the United States, after a long month-long journey where the family did not touch meat, so as not to eat non-kosher meat. When my grandmother grew up and had children of her own, another chapter of devotion came: they left a comfortable life, left the business, and immigrated to Israel after the Six Day War.

”My mother was a girl at the time, and she kept a Torah scroll with her for all the hours of the long flight, 12 hours, that they brought with them to Israel. For me he knelt to my mother, to my grandmother, to all the mothers wherever they are. He did not bow down because I am the chief of staff at the President’s Residence, and he does not know that I am finishing my doctorate soon. He wanted to express appreciation for the value of family, of home, of motherhood, of sacrifice for the sake of raising the next generation,” she said.