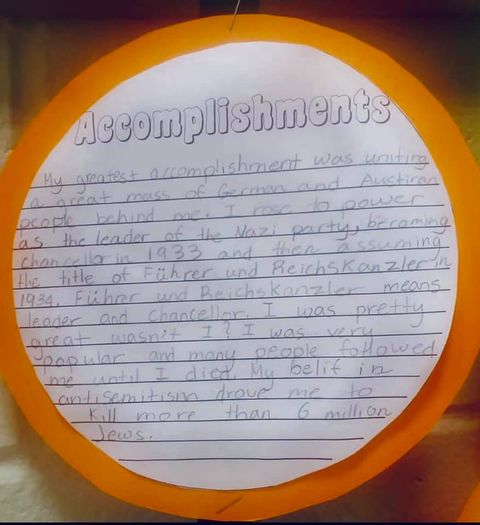 A New Jersey fifth-grade student’s essay written in the first-person about Adolf Hitler’s “accomplishments” is under investigation by the school, according to authorities.

The unidentified Tenafly student wrote their “Character Development project” about Hitler’s “accomplishments” in the first-person, according to Englewood resident Lori Birk, who posted a picture of the essay on Facebook. Birk claims the student dressed as Hitler while reading his essay aloud to the class.

“My greatest accomplishment was uniting a great mass of German and Austrian people,” the essay reads. “I rose to power as the leader of the Nazi party, becoming chancellor in 1933 and then assuming the title of Führer and Reichskanzler in 1934.”

“I was pretty great, wasn’t I?” the essay reads, according to the Facebook post. “I was very popular and many people followed me until I died. My belief in anti-Semitism drove me to kill more than 6 million Jews.”

Tenafly Public Schools Superintendent Shauna DeMarco said in a statement Monday the school would be looking into the project.

“We understand that tensions are running high and that our community is extremely upset. We share those feelings,” DeMarco said. “We are reviewing all of the facts surrounding this matter and will provide an update this week. In the meantime, we are committed – as always – to cultivating a positive school culture that has no room for hate, prejudice, bias, or oppression.”

DeMarco issued another statement Tuesday, noting the “assignment has been taken out of context, resulting in understandable anger and concern.”

“The assignment (which was given by a teacher who happens to be Jewish) asked students to speak from the perspective of one of these individuals and how they might have perceived and rationalized their actions.”

“When people saw the students’ projects, which were displayed in the school, they did not understand the assignment, resulting in justifiable concerns,” DeMarco continued. “Given that the lesson was specifically issued within the context of social justice, it is unfair to judge any student or teacher in this matter.”

3 thoughts on “Anti-semitic Report by 5th Grader in NJ Updated:”