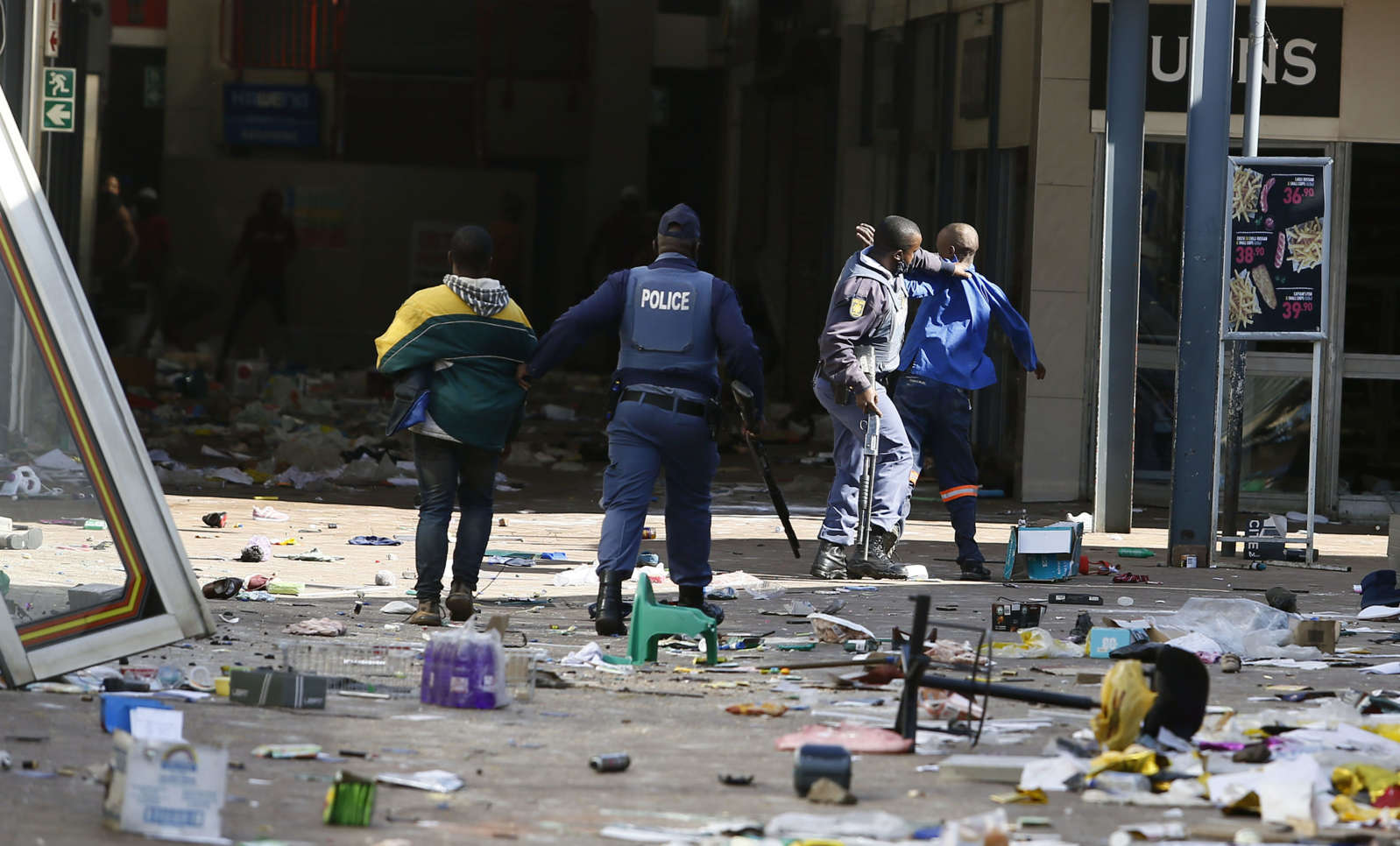 South Africa’s business leaders and economic experts warn that the spreading violence and unrest in the country will damage the economy, as reports point to an imminent declaration of a state of emergency in the country.

Bloomberg reported that some of the country’s largest companies were forced to halt operations as violent protests erupted in KwaZulu-Natal and the economic hub of Gauteng, with rioters torching trucks and looting stores.

The nation’s four biggest lenders led by Standard Bank and First Rand all closed branches in those two provinces, the companies said in emailed responses to Bloomberg on Monday.

Massmart Holdings, Vodacom Group, and MTN Group were among others to close outlets, it said.

Dis-Chem Pharmacies closed all its drugstores in KwaZulu-Natal, hampering South Africa’s Covid-19 testing and vaccine rollout, according to text messages sent to customers.

Business leaders called on authorities to quell the violence that has escalated since the arrest of former president Jacob Zuma last week, with the army being deployed to help police.

“We are doing all we can to ensure that the disruptions are minimized,” Trudi Makhaya, an economic adviser to president Cyril Ramaphosa, said in a webinar organised by the World Bank. “Of course, that begins with arresting criminals, intervening in those hotspots where we’re seeing challenges.”

Business Unity SA (BUSA) chief executive officer, Cas Coovadia said that the group has been inundated by appeals from members expressing deep and serious concern about the anarchy in the country in the last few days.

“The anarchy has caused significant economic damage and cost and the ongoing violence and destruction of property continue to cause severe losses to the economy. The resultant loss of jobs—because of businesses not having the confidence to continue operating—will exacerbate an already high unemployment rate.

“These events are being reported on globally, resulting in significant loss of confidence in our country as an investment destination, at a time we are competing with more positive destinations in different parts of the world.

“This will harm our efforts to put SA onto a sustainable inclusive growth path and hamper our efforts to address the severe social and economic challenges our country faces,” said Coovadia.

The economic damage, because of anarchy by a small group of people, will be long-lasting and will be felt broadly, particularly amongst those who are already under severe stress.

“We are concerned that the reaction of our security establishment to this anarchy has been relatively weak, until this afternoon. We welcome the mobilisation of the military. We believe this decision should have been taken earlier, but now urge the SAPS and SANDF to act urgently to protect people and property and arrest perpetrators,” Coovadia said.

Annabel Bishop, chief economist at Investec noted a weakening in the rand on Monday amid riots and looting in the country.

“The rand weakened in response to the widescale riots and destruction of property in certain areas in South Africa as the disgraced former president’s supporters are reported to have closed off some roads, set fire to certain shops and looted electronic and other retail goods.

“While police action has been noted in some areas, other spots have seen little intervention. If left to continue unchecked, the impact on South Africa’s overall economic activity, business and consumer confidence in Q3.21 could be severe.

“With the economy already under pressure from tightening lockdown restrictions at the turn of Q2.21 into Q3.21, growth forecasts may now be further downgraded,” Bishop said.

Bishop noted that the army has been called on to assist the thinly-stretched police force.

“Supporters have appeared to expect little or no real retribution so far. The risk is that the collapse of law and order spreads across the entire country, shutting off the economy and making it more difficult to roll back from the initial violent outbursts,” Bishop said. This, she pointed out, is not the base case.

“Apart from losses faced by the private sector, the volatile situation, if not rapidly brought under control, will quickly begin to impact investor sentiment, threatening to derail the hard-won gains in the Ramaphosa presidency if it approaches civil war,” the economist said, noting that this is a severe down case, and not the expected case.

City Press reported that president Ramaphosa is expected to announce a state of emergency in KZN and Gauteng on Monday evening. Under the state of emergency, only essential workers and those carrying permits are permitted to travel, it said.

“Gauteng and KwaZulu-Natal are going into a state of emergency as of tonight [Monday] after [President Cyril] Ramaphosa address,” a source in the security cluster told City Press.

Ramaphosa will address the nation on Monday (12 July), with Cooperative Governance and Traditional Affairs (Cogta) minister Nkosazana Dlamini-Zuma having already announced the extension of South Africa’s national state of disaster by a further month.