An Extraordinary Inflection Point in the 70 Year History of Cuban Communism and It’s Threat to American and World Democracy: 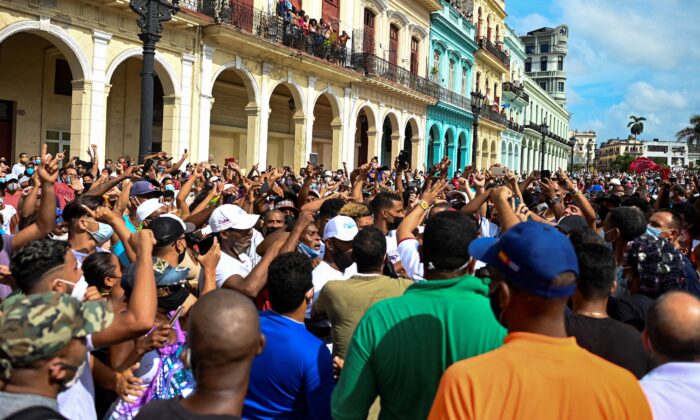 ‘Down With Dictatorship’: Thousands of Cubans Demonstrate Against Communist Regime. This has never happened before. In fact the opposite occurred in 1949/50 with the overthrow of the US Backed Batista regime in favor of the Tyrant, Fidel Castro. The regime is shutting off the internet, says Florida Congresswoman

Thousands of Cubans took to the streets on Sunday in a number of cities to protest against human rights abuses, a lack of freedom, and a worsening economic situation in the communist-ruled country.

Videos uploaded to social media appear to show demonstrations in a number of towns and cities, including the capital, Havana, on Sunday. Protesters, chanting in Spanish, said they “weren’t afraid” of the regime led by Miguel Diaz Canel, and said they wanted access to COVID-19 vaccines and an end to the regime.

It comes amid reports of gas, electricity, and vaccine shortages across the Caribbean island nation.  Some analysts noted online that Sunday’s demonstrations are the first time that so many had protested the government since the Maleconazo uprising in 1994, which prompted a number of Cubans to leave the country by boat to the U.S.

Shouts of “down with the dictatorship,” “freedom,” and “homeland and life” were also heard during the demonstrations, according to footage uploaded online.

During different live broadcasts across Facebook, thousands of people can be seen marching through the streets of cities like San Antonio de los Baños, Guira de Melena, and Alquízar, reported South Florida’s WTVJ-TV.

“I just walked through town looking to buy some food and there were lots of people there, some with signs, protesting,” local resident Claris Ramirez said by phone. “They are protesting blackouts, that there is no medicine,” she added, reported the Reuters news agency.

In response to the demonstrations, Diaz-Canel echoed an often-repeated claim by other Marxist governments and blamed the protests on a foreign smear campaign initiated by the United States.

“The order of combat is given, the revolutionaries take to the streets,” he said on a state-run radio and television network, apparently ordering his security forces to disperse the demonstrators.

Sen. Marco Rubio (R-Fla.), who is of Cuban descent, chronicled the protests on Twitter.

“Spontaneous street protests breaking out in several cities in #Cuba right now with chants of #NoTenemosMiedo (We Are Not Afraid),” he wrote in a tweet. “Frustration with the dictatorships incompetence,greed & repression is mounting rapidly.

The Senator also appeared to take note of security forces that were deployed.

Florida Congresswoman Maria Elvira Salazar, the daughter of Cuban exiles, said that Diaz-Canel’s regime is now shutting off internet on the island.

Miami Mayor Francis Suarez, also the son of Cuban exiles, whose city has a significant Cuban diaspora, called for an American-led intervention.

“Cubans are worthy and ready to rule themselves without tyranny,” Suarez said during a press conference. “It can end today and it must end today. The implications of this moment can mean freedom for millions of people in the hemisphere, from Nicaraguans and Venezuelans and so many more.”