A World in Chaos: A Less than Brief Digest of World Events Today! 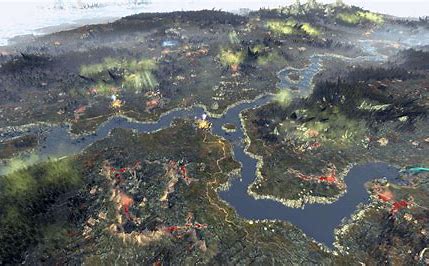 In what appears to be a free for all of insane activity (akin to the illustration of ‘grain feed in a chicken coop,’ by R’ Chaim Volozhin), European countries, Asian countries, and (interestingly mostly Blue States in the USA) are claiming ‘rising deaths from OMICRON—thus instituting lockups—while in the US itself, CDC saying not so bad. However, Biden says, if advised so he will ban travel for the unvaccinated, Fauci reduced quarantine time from 14 days to five days, HELP! Will someone tell us what is going on here?

(JNews Dec 29, 2021) Here are some of the headlines that are blasting in the news media between yesterday and today.

Reuters: Malaysia to spend $335 million for flood relief that took place this month

BREAKING: Italy Spain, Mandate MASK MANDATES ‘EVEN OUT DOORS’ Double Masks for indoor Shopping. Private Sector Employment to ‘GO BACK TO WORKING AT HOME, and most importantly, THE MILITARY WILL BE DEPLOYED TO ASSIST.

These rules in Europe were mandated by Executive Decree meaning that no parliamentary debate is in play regarding these new rules.

We cannot forget about a news item reported last week regarding the city Xi’an  (pronounced shee-an) China. While the main stream media was largely mute on this event, it was covered.

The significance of this event should be self evident to anyone with the most scant knowledge of the whole COVID story at the time it ‘broke.’

The original Virus–we now know—broke in the city of Wuhan, China. The city of Wuhan is located in the larger Hubei District in China but is by far the largest city in the district. Wuhan, the—now infamous—home to the ‘WUHAN VIROLOGY LAB’ where the Corona Virus was born from the research done in partnership with US NIH funded research groups headed by Francis Collins, (scheduled to resign at year end) and Anthony (Creepy Tony) Fauci who heads its subdivision, known as NAID.

When the (so called) accidental release of the Corona Virus took place, the Chinese (Government) Communist Party shutdown the city of Wuhan and literally locked it down completely—meaning no one in and no one out. Whats the big deal you ask? Wuhan is a city with a population of over 10 million. Now think about that; imagine the entire city of New York—all five boroughs—surrounded by military and police at every nook and cranny of its border, can it even be done in the way our country is accustomed to functioning? The answer I believe is probably not.

Xi’an, just locked down in China, is a city of over 13 million. If China is locking down a city that size using military resources necessary to accomplish that goal, you know something very strange is going on. You must remember that when Wuhan broke, China kept it quiet and the world was unaware of it for almost 3 months. (Most of you now know that the Wuhan incident is reported to have taken place as early as October 2019 and some major authorities believe it was even earlier.)

But as it turns out we now know about the Xi’an lockdown, but no one is asking why such a severe lockdown on such a massive scale.

Many of you might think that so many countries are doing it—just look at Australia—whats the big deal? In China it is a big deal. The city is Xi’an is a strategically located city in the heart of its ‘Belt and Road Initiative’ ((Referred to as BRI) a phrase coined by the Chinese for its long term project to be the leading trading partner in the world. The city of Xi’an is located in the ‘Shaanxi‘ district (pronounced Shen-si)—the gateway to the rest of Asia, SE Asia and Europe, where the success of BRI is most critical—is not a small issue; this not just about ‘control.’

As adherents of Torah and Mesorah, we need to take heart of what is going on now and what this all means to us. We are living in a time when the events are screaming to us to strengthen our ourselves in our ‘Emunah and Bitachon in Hashem and to focus on Torah, Avodah and Gemilus Chasadim

2 thoughts on “A World in Chaos: A Less than Brief Digest of World Events Today!”