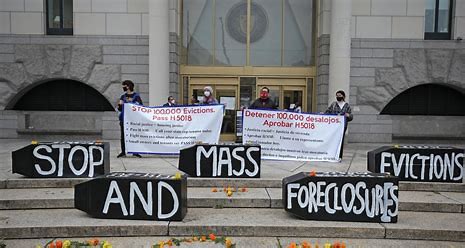 This issue has been lurking in the background for months.  Where I live, there are almost no homes on the market for rent.  The inventory of the number of homes for sale is at record lows, and when combined with historically low home mortgage rates, the prices at which homes are selling have gone through the roof.

There are no homes for rent because landlords have been unable to evict tenants for non-payment of rent for a year or more, depending on where you live.  The federal government — based on dubious legal authority — imposed an eviction “moratorium” during the pandemic, allowing renters to stop paying their rent safe in the knowledge that their landlords couldn’t do anything about it.

There are fewer houses for sale on the market because homeowners in financial trouble have not had to sell their houses in order to eliminate their mortgage debt.

That is all about to end.  As reported in this story by CBS News, as many as 8 million people face eviction by their landlords or foreclosure by their banks and could lose their place to live beginning next month.

Even as the nation rebounds from the coronavirus pandemic, more than 2 million homeowners are behind on their mortgages and risk being forced out of their homes in a matter of weeks, a new Harvard University housing report warns.

Separately, millions more renters are “on the brink of eviction,” the Harvard researchers found. Census data show that 6 million households are still behind on rent and could face eviction at the end of June, when federal eviction protections expire.

The Center for Disease Control order halting some evictions, and federal liminations on foreclosures for federally-backed housing, both expire on June 30.

Banks have been legally blocked from foreclosing on mortgages for non-payment.  Where I live, the state courts that handle mortgage foreclosure cases simply closed the doors to new filings, and have not scheduled any hearings on filings that were pending when the moratorium was imposed.

Federal District Court Judge Dabney Friedrich in the District of Columbia ruled last month that the renter eviction moratorium was illegal, but stayed the effect of her order while the Biden Administration appealed her ruling.

This unfortunate reality only reveals that most of the economic cost of shutting down or drastically curtailing economic activity in the United States has only be delayed, not eliminated

We still see high rates of unemployment, while the true extent of business closures is just now becoming known.

Inflation is artificially propping up economic activity numbers such as consumer spending, but consumers are getting less value for every dollar they spend. Food and energy prices are way up.

Inflation is just a tax on spending power, and that will ultimately be revealed when the decline in activity at the producer and wholesaler levels begins to be felt.  Consumers paying higher prices for goods and services results in them buying less of those goods and services over a given amount of time — which is revealed as part of lagging indicators of economic activity.

Economists and politicians know this is coming.  That is why the Democrats are so desperate to pump another $4 trillion in government spending into the economy as “infrastructure investment.”  We don’t really need it on an emergency basis, and it will cause even greater inflation.  But it will also artificially create economic activity that allows businesses to create jobs and pay workers — enabling them to pay the higher prices caused by inflation.

The Democrats don’t really care about “then” — as long as “then” comes after November 2022.