Who’s In Charge Of America Right Now? Because It Isn’t The Man Getting Wrangled By A Giant Easter Bunny 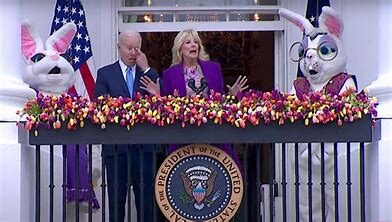 The White House celebrated Easter on Sunday with its traditional egg roll, but the Resurrection Day festivities turned into a national embarrassment thanks to the president. His handlers, including his wife, did their best to walk him around like a pet, telling him when to sit, speak, and stay.

This all raises the obvious and alarming question: Who is in charge of the greatest country on Earth right now? Because it sure as heck isn’t Joe Biden.

If you haven’t seen any of the footage, you might think this is an exaggeration, but it isn’t. Here’s Jill Biden monopolizing a children’s book reading, with her husband announcing, “And they’re not going to let me read at all.”

“I’ll let you— here, you can start us off,” the first lady said patronizingly, letting the president read only the first page.

And here’s Jill Biden tapping Joe on the arm with the command to “just stay,” presumably so he didn’t wander off as he is wont to do, followed by the duo awkwardly laughing it off as if she hadn’t just treated the president of the free world like a puppy in training.

Following the president’s address from the White House, the first lady jumped in, instructing him to do the obvious: “Wave, wave.”

Of course, if there’s anything we know about marital dynamics, it’s that “Type A” wives often stay on top of the little details and help their husbands do the same. But this Joe Biden cringiness wasn’t just the presidential equivalent of misplacing a wallet or not being able to find something that’s located smack-dab in the middle of the fridge. This was like watching an assisted-living nurse spoon-feed a patient.

Worse, it wasn’t just Biden’s wife taking care of him; even a giant furry was tasked with wrangling the president. When Biden started yammering about Pakistan and Afghanistan—his failed and deadly withdrawal from which became one of the many defining crises of his presidency — the Easter bunny stepped in to cut off the president from saying another word.

If by some delusion, anyone still had any remaining confidence in the competence of our executive, that should have shattered it. But this isn’t just about pointing out the Biden gaffe machine’s perpetual blunders. I t’s a serious question: Who is in charge?

We know it isn’t Joe Biden, and although his wife had the reins on Sunday, we know the first lady’s power is extremely limited. It probably isn’t the person in the bunny suit either.

We also know it isn’t Kamala Harris, who despite being decades his junior can’t string together a more coherent sentence than he can and seems to be largely shielded from the administration’s pet policy work in true “Veep” fashion.

It isn’t White House Press Secretary Jen Psaki, who gets schooled by Fox News’ Peter Doocy on a near-daily basis and is rumored to be leaving her post soon for a gig at MSNBC, where she’ll continue to spin for the Biden administration.

We also know it isn’t the Democrats in Congress, who don’t have a large enough majority to do jack-diddly except to advance Biden’s Supreme Court nominee (not to be confused with a biologist) to the bench—with Republican help.

Who’s in charge of the United States is an important question, and this isn’t a laughing matter. All our foreign adversaries are watching this and licking their chops. Weakness invites aggression, as we’ve already seen with Russia’s advance on Ukraine and the systematic destruction of the U.S. southern border.

So here we are: more than 330 million people, ostensibly in the hands of a president who’s being ushered around by an Easter bunny, with no idea who’s actually in charge around here. Given the state of our grocery shelves, southern border, gas prices, job openings, foreign policy, public schools, inflation, and health care, it would be awfully nice to know.

Kylee Zempel is an assistant editor at The Federalist. She previously worked as the copy editor for the Washington Examiner magazine and as an editor and producer at National Geographic. She holds a B.S. in Communication Arts/Speech and an A.S. in Criminal Justice and writes on topics including feminism and gender issues, religious liberty, and criminal justice. Follow her on Twitter @kyleezempel.

One thought on “Who’s In Charge Of America Right Now? Because It Isn’t The Man Getting Wrangled By A Giant Easter Bunny”