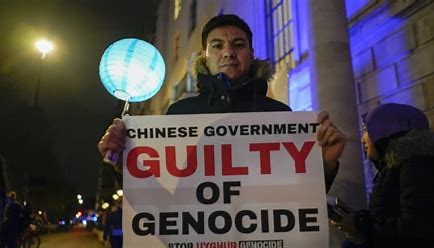 “The brazenness is remarkable,” Yaqiu Wang, senior China researcher with Human Rights Watch, wrote Monday on Twitter. “How can this person who has everything just say this about people who are suffering unfathomable pain?”

Social Capital founder and CEO Chamath Palihapitiya made the remark in a Jan. 15 debate with his All-In podcast co-host Jason Calacanis, who had complimented President Joe Biden for condemning the atrocities but lamented it had not fortified Biden’s flagging poll numbers. Palihapitiya interjected that “nobody cares about what’s happening to the Uyghurs” and defended that disinterest himself.

“If you’re asking me, do I care about a segment of a class of people in another country—not until we can take care ourselves will I prioritize them over us,” Palihapitiya said. “Every time I say that I care about the Uyghurs, I’m really just lying, if I don’t really care. And so I’d rather not lie to you, and tell you the truth: It’s not a priority for me.”

Wang added it is “ironic” that Palihapitiya when his investment firm declares its “mission is to advance humanity by solving the world’s hardest problems.

“Not everyone gets to ignore the Uyghur Genocide,” said Campaign for Uyghurs executive director Rushan Abbas, a Uyghur American who has testified before the Senate Foreign Relations Committee about her sister’s detention, in a tweet. “Before you speak, consider the victims of these atrocities like my sister, imprisoned for 41 months w/no word. Ignoring human suffering doesn’t make you brave. It makes you privileged & selfish!”

Palihapitiya implied Calacanis’s denunciation of their abuse comes at the expense of his responsibility as a white man to rectify social ills within the United States.

“We have an abysmal track record of taking care of colored men and women in this country, and so I have zero patience and tolerance for white men blathering on about s*** that happens outside your own backyard,” he said. “Fix your own backyard … You are uniquely in a position of power in a way that the rest of us are not. And so when you guys clean up the inside, then we can go and face the outside.”

The NBA has had a fraught relationship with China in recent years, dating back to then-Houston Rockets General Manager Daryl Morey’s public statement of support for the pro-democracy protesters in Hong Kong in 2019. Chinese officials retaliated by censoring NBA games on state TV, which NBA officials estimated would cost them “hundreds of millions of dollars.”

Palihapitiya’s argument this weekend dovetailed with remarks that Golden State Warriors Head Coach Steve Kerr made while traveling in China amid the fallout from that controversy when he responded to a reporter who broached the topic of human rights in China by discussing gun violence in America.

“It has not come up in terms of people asking about it, people discussing it,” Kerr said. “Nor has our record of human rights abuses come up, either. Things that our country needs to look at and resolve. That hasn’t come up either.”

Kerr later expressed regret for those comments, explaining he struggled to think of something to say that wouldn’t “put the league in jeopardy.” In 2020, a senior league official avoided a question about why the NBA established and then closed basketball academies in Xinjiang, the region where the Uyghur atrocities are taking place, by saying the NBA can’t always “take a position” on such things.

“My job, our job is not to take a position on every single human rights violation, and I’m not an expert in every human rights situation or violation,” NBA Deputy Commissioner Mark Tatum told ESPN.

Palihapitiya maintained it is too difficult to “know anything about any of these things” and rejected the idea he “should be talking about human rights in Hong Kong,” Xinjiang, or other countries, such as Saudi Arabia.