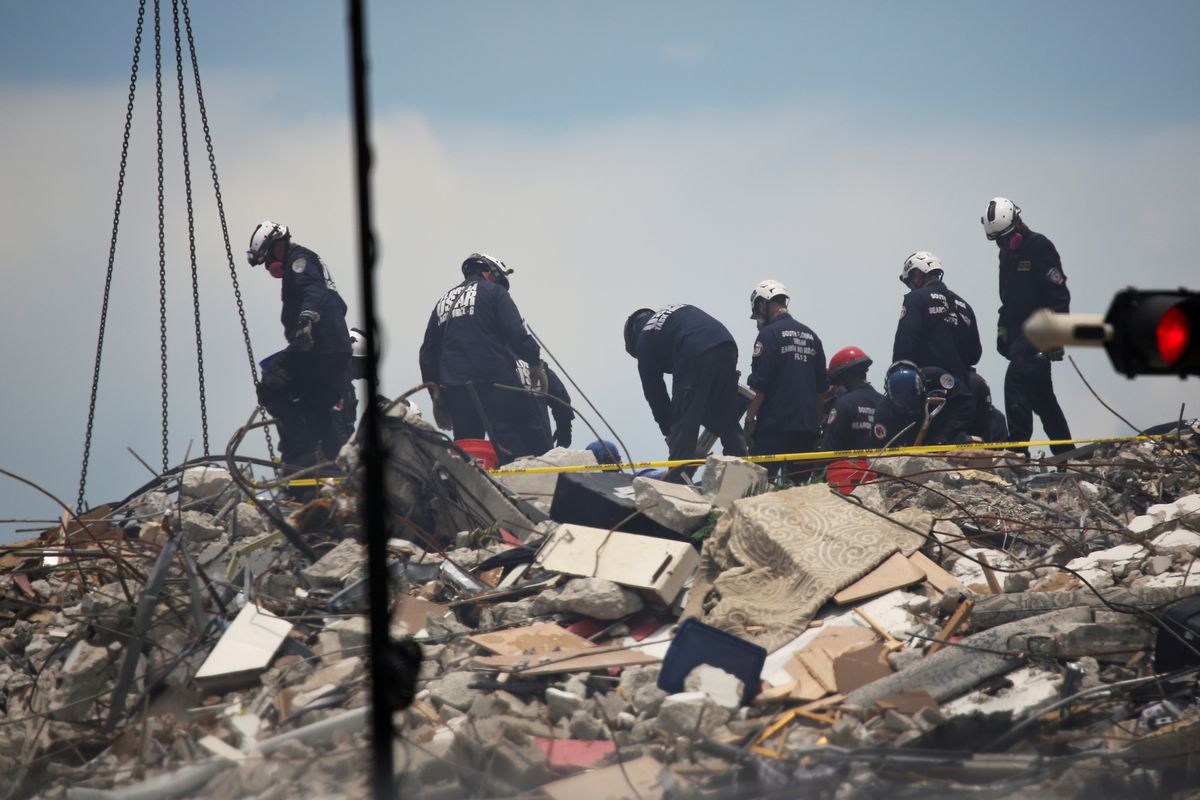 SURFSIDE, Fla., June 27 (Reuters) – As the death toll rose to nine with more than 150 people still missing, rescue teams on Sunday kept picking through the rubble of the Florida condo building that collapsed three days ago, as questions swirled about the tower’s structural integrity.

Officials in Surfside, the shore town near Miami where the building stood along the oceanfront, said hope remained that search teams would discover survivors in air pockets that may have formed in the pancaked debris.

Even so, Fire Chief Alan Cominsky said on Sunday crews had yet to find any signs of life.

Two large cranes and two backhoes worked to remove the debris – a contrast from Saturday when the machines were idled and workers were forced to clear rubble by hand. An American flag atop one of the cranes rippled in the stiff ocean breeze. Visitors had placed flowers alongside a plastic barrier on the beach that kept onlookers at bay.

Miami-Dade Mayor Daniella Levine Cava said at all times six to eight squads were working on the multi-story pile of shattered concrete and metal wreckage that lay next to the parts of Champlain Towers South that remain standing.

The searchers – including experts sent by Israel and Mexico – are using dogs, sonar, drones and infrared scanners.

“Hundreds of team members are on standby to rotate as we need a fresh start,” Levine Cava said at a briefing in which she announced the death toll had risen to nine. “So we are not lacking any personnel, but we have the best, we have the right people and the right number, and we are getting it done.”

A smoldering fire beneath the rubble that produced thick smoke and hindered the work of rescuers has abated, officials said. The mayor said a trench was dug to separate the areas of smoking debris from the rest of the rubble and rescuers are also using tunnels.

Some families of those missing have provided DNA samples to officials while others recounted narrow escapes. Police released the names of four victims who ranged in age from 54 to 83. They were a couple married for 58 years who were devoted to one another, a volunteer Little League baseball coach and the mother of a 15-year-old boy who was one of the few survivors of the collapse.

One of the residents, Erick de Moura, considers himself very lucky. He was supposed to be home when the building collapsed, but his girlfriend persuaded him to spend the night at her place less than 2 miles (3 km) away in Miami Beach, likely saving his life.

“Only by God. To me this is a miracle,” the 40-year-old Brazil native told Reuters.

Photographs of the missing were posted on a nearby fence, along with flowers and messages. “The Lord is My Refuge” read one handmade sign. “Surfside God is with you” said another.

On Saturday, family members prayed and kept a silent vigil.

Some residents remain in Champlain Towers North, a sister building to the one that collapsed, where only a voluntary evacuation order has been issued. An inspector did not find any immediately obvious problems with the other building.

“Having said that, I don’t know if I’d be comfortable staying in that building,” Surfside Mayor Charles Burkett said, until a comprehensive review was completed.

Officials said on Saturday that Miami-Dade County would audit all buildings more than 40 years old within the next 30 days to ensure their safety.

“Once we understand, legislation will be taking place so that this will never happen again,” County Commissioner Pepe Diaz said.

Surfside officials have released documents including an engineer’s report from 2018 that found major structural damage beneath the pool deck and “concrete deterioration” in the underground parking garage of the 12-story condominium.

The report was produced for the Champlain Towers South condominium board in preparation for a major repair project set for this year.

Donna DiMaggio Berger, a lawyer who works with the condo association, said the issues outlined in the 2018 report were typical for older buildings in the area and did not alarm board members, all of whom lived in the tower with their families.

The report estimated it would cost $9.1 million to make the recommended repairs. Work had started on replacing the roof, but the pandemic slowed the project, she said.

Satellite data from the 1990s showed the building was sinking 1 to 3 millimeters per year, while surrounding buildings were stable, according to Florida International University professor Shimon Wdowinski.

Gregg Schlesinger, a lawyer and former general contractor who specializes in construction-failure cases, said it was clear to him that the structural issues identified in the 2018 report were the main cause.

He said investigations and the inevitable lawsuits will eventually paint a full picture of what caused the disaster.