Understanding Inflation: Buckle Up, You Are About to go into an Economic Tailspin. READ ON! 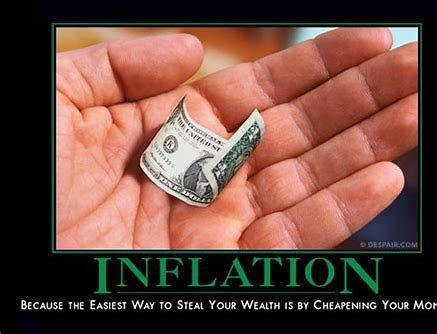 As Inflation Rears Its Ugly Head, Here’s Why You Should Be Worried

Since inflation is a process and not an end-state, it never seems too bad at the start. Unfortunately, Americans should prepare to buckle up for the future.

As the COVID-19 panic slowly recedes across America, you’ve probably noticed that you’re paying more at the pump. Indeed, the national average for regular-grade gas price has risen more than 34 percent, from less than $2.00 a year ago to $2.68 lately. There are several reasons the gas price has spiked up, including the production problem caused by the harsh winter, increasing consumer demand as the country reopens, and one other sinister culprit: inflation.

Inflation is an economic phenomenon that sees a steady rise of prices for goods and services eroding purchasing power — or you can buy less with the same amount of money. Economists usually pay close attention to the inflation rate, or the rate general prices increase. In the United States, the inflation rate is usually measured by the Consumer Price Index, a mathematical tool that measures the prices change for a selected basket of goods and services.

Since inflation is a process and not an end-state, it doesn’t seem too bad in the beginning. As prices for goods and services gradually rise, those who are employed demand higher wages in turn. Employers will usually comply because the early stage of inflation is often associated with booming economic activities and a tightened labor market. So, while workers will usually get the higher wages they demanded, they will typically also have to pay higher prices for things they need or enjoy as businesses find various ways to pass the cost of wage hikes unto consumers.

When consumers notice their money is losing value, it gives them an incentive to spend more and buy more stuff now rather than holding cash. As a result, both consumer spending as well as business investment will increase. Such increases will, in turn, stimulate further economic growth.

The Disastrous Effects of Inflation

In the long run, however, inflation is a bad thing. As consumers and businesses are motivated to spend more now, they drive up prices of goods and services, the economy finds itself with an abundance of cash no one wants, and money quickly decreases in value.

To combat inflation, a nation’s central bank usually has to increase interest rates, meaning higher borrowing costs for consumers and businesses. When businesses become less likely to invest, expand, and grow, these factors combine to increase the likelihood of an economic recession, which in turn leads to scarcity in various sectors of the economy.

In the later stage of inflation, there is too much money chasing too few goods and services. At this point, the economy enters a vicious cycle: as the nation’s currency depreciates, incentive increases for consumers and businesses to spend and get rid of their cash; demand drives up the prices of goods and services; central banks increase interest rates higher to combat inflation, driving up borrowing costs while depressing businesses investments and incentives to produce; and the value of the nation’s currency drops further, creating even more incentive to spend. The cycle goes on and on.

Such a vicious sequence can eventually even lead to hyperinflation, an economic phenomenon in which prices of all goods and services rise effectively out of control. A good example is what happened to the Zimbabwean dollar (ZWD). Between 2007 and 2008, Zimbabwe experienced one of the worst hyperinflations in human history, with “prices doubling approximately every day at its peak.”

The Zimbabwe government kept re-evaluating ZWD by issuing notes with a large denomination. During the third revaluation of ZWD, the Zimbabwean government issued a ZWD note of 1,000,000,000,000, which couldn’t even pay for a loaf of bread. Predictably, the hyperinflation devastated Zimbabwe’s economy.

Venezuela provided a more recent example of hyperinflation as years of failed socialist economic policies and corruption drove its economy to the ground. By the end of 2018, Venezuela’s annual inflation rate reached 80,000 percent and the Venezuelan bolivar became so worthless thieves refused to steal it.

How to Get Out of the Mess

As Milton Friedman famously said, “Inflation is always and everywhere a monetary phenomenon,” meaning it is caused by excessive money supply as the result of expansionary monetary and fiscal policies. Let’s not forget the great inflation Americans had to endure between the 1970s and early 1980s.

Among other things, the Federal Reserve increased the money supply to help finance the Nixon administration’s continuation of the War in Vietnam as well as its expansion of Social Security. As such, the U.S. inflation rate reached 14 percent in 1980, and the U.S. dollar devalued sharply.

Under the Reagan administration, it took Federal Reserve Chairman Paul Volker to impose harsh monetary policies, including increasing the interest rate to 22 percent, to eventually defeat the inflation, with the inflation rate dropping to less than 3 percent within two years. Still, Americans paid a steep price for Volker’s medicine. The U.S. economy plunged into recession, the unemployment rate reached 10 percent, and many companies, small and large, were driven out of business.

Threat No. 1: The Money Supply

Although today, the inflation rate in the United States is still at a historical low, it’s the trend of the record-setting increase in the nation’s money supply that should be the greatest concern.

There are several ways to measure the size of the money supply, and economists name them with the letter “M” (such as M0, M1, and M2). The M2 is used most often because it includes cash, checking deposits, savings, and money market securities.

Chart 2. U.S. Money Supply Measured by M2 on “percent changed from a year ago” basis as of January, 2021

On the monetary policies side, the U.S. Federal Reserve creates false demand for American debt by purchasing billions of U.S. Treasuries on the open market every month, paying for this monthly purchase by printing money, thus, flooding additional money into the U.S. economy.

On the fiscal policies side, the U.S. federal government now borrows and spends money at a record rate. As of March 2021, the U.S. national debt surpassed $28 trillion. Between the former Trump administration, the current Biden administration, and the U.S. Congress, three rounds of COVID-19 related “economic stimulus” packages injecting $3 trillion into the U.S. economy, including sending three rounds of stimulus checks into the hands of American consumers.

Currently, the Biden administration is working with Democrats in Congress to pass another $2 trillion spending bill labeled “infrastructure.” Unfortunately, such excess money supply and the anticipation that more is coming have already driven up the inflation rate in the United States.

Time to Wake Up

As of March, the CPI sported a year-over-year increase of 2.6 percent, the most significant 12-month increase since August 2018. The Producer Price Index — an index that measures prices charged by producers — also increased by 4.3 percent.

According to the Wall Street Journal, rising production costs are already pushing up the prices of many household items. Several companies, including Kimberly-Clark and General Mills, said they would start increasing the prices of their products to help pay for higher raw-material costs. So, as U.S. consumers should soon expect to pay more for toilet paper and cereals, it’s no wonder economists often refer to inflation as a “hidden tax” on U.S. consumers.

The Federal Reserve will eventually have to increase interest rates to combat inflation, which means higher borrowing costs for both U.S. consumers and businesses. If we run into another great inflationary period like the one endured in the ’70s, our economy could head into recession, and unemployment rise.

Former Clinton administration Treasury Secretary Lawrence Summers warns the Biden administration’s economic stimulus could “set off inflationary pressures of a kind we have not seen in a generation.” Sen. Rick Scott, R-Fla., echoed a similar warning:

It’s time for Biden to wake up from his liberal dream and realize that reckless spending has consequences, inflation is real, and America’s debt crisis is growing. Inflation is rising, and Americans deserve answers from Biden now.

As the saying goes: “Those who fail to learn from history are condemned to repeat it.” Well, the American economy and those affected by its peril (or prosperity) will be better off if the Biden administration and the Democrat-led U.S. Congress demonstrate some fiscal discipline regarding our excessive spending and growing national debt before ruin becomes unavoidable.Helen Raleigh, CFA, is an American entrepreneur, writer, and speaker. She’s a senior contributor at The Federalist. Her writings appear in other national media, including The Wall Street Journal and Fox News. Helen is the author of several books, including “Confucius Never Said” and “Backlash: How Communist China’s Aggression Has Backfired.” Follow her on Parler and Twitter: @HRaleighspeaks.

2 thoughts on “Understanding Inflation: Buckle Up, You Are About to go into an Economic Tailspin. READ ON!”