Ukrainian Troops Line Up Across a Kiev Highway as they Prepare to Confront Putin’s Troops who are now INSIDE the City: Gunfire and Explosions are Heard as Terrified Residents are Urged to Make Molotov Cocktails to Defend Themselves 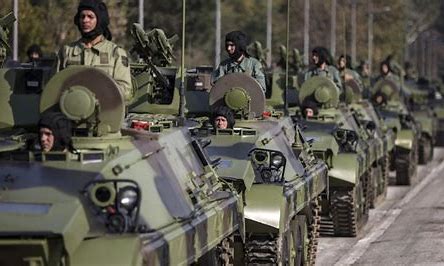 Ukrainian forces took to the streets of Kyiv today with national guard troops pictured lining up defensive positions along a highway shortly before the sounds of gunfire and explosions rang out as they battled Russian forces for control of the capital.

Putin’s men are now thought to be inside the city, though their exact location and number is unclear. Fighting was reported in Obolon, on the city’s outskirts, in the early hours as the ministry of defence told residents to make Molotov cocktails to ‘repel the occupiers’. Russian forces were also spotted in Vorzel, Bucha, Irpen districts.

The Russian troops are thought to have arrived from the north-east, having pushed down from Chernobyl which was captured late yesterday. More Russian troops and armour are advancing on the capital from Konotop, in the east, having bypassed the city of Chernihiv where they ran into heavy Ukrainian resistance.

Anton Herashchenko, an adviser to Ukraine’s interior minister, said today will be the war’s ‘hardest day’.

Once Kiev is surrounded, US intelligence believes the plan will be for Russian special forces to move in and seize an airport – likely Sikorsky or Boryspil – which would then be used to fly in a much larger force of up to 10,000 paratroopers who would assault the capital.

The job of the paratroopers would be to enter the city, find Zelensky, his ministers, and parliamentarians, before forcing them to sign a peace deal handing control of the country back to Russia or a Moscow-backed puppet regime – effectively ending the war without Putin’s ground forces needing to complete the difficult and bloody task of seizing and occupying the whole country.

It appears the Russians almost pulled off the plan on the first day of the invasion when 20 attack helicopters landed a crack team of troops at Antonov Airport, 15 miles to the north of Kyiv. But Ukrainian national guard units managed to retake the landing strip overnight after heavy fighting, scattering the surviving Russian attackers into the surrounding countryside.

A Russian attack on the capital would likely be coordinated with a push by troops on southern and eastern fronts – Crimea and Donbass – aimed at pinning down Ukrainian armed forces so they cannot retreat and reinforce the city, officials told author Michael Weiss.

It may also be accompanied by bombing raids and sabotage attacks on power grids and infrastructure to sow panic and force people to flee, snarling up roads and making it difficult for forces already in Kyiv to move around.

The plan appeared to be underway in the early hours, as explosions sounded before dawn with the city under bombardment from what the defense minister called ‘horrific rocket strikes’ not seen since 1941.

Ukraine’s armed forces claimed to have shot down a Russian jet over the outskirts of the city, with flaming wreckage seen falling from the sky, as Zelensky gave a national address, saying Russia has identified him as ‘target number 1’ of the invasion but he and his family were remaining in the city.

He said invading Russian forces are targeting civilian areas, praising his countrymen for their ‘heroism’ and assuring them that the armed forces are doing ‘everything possible’ to protect them.