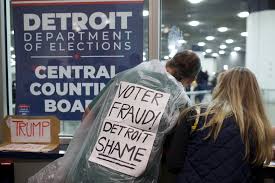 It’s too late now, but vindication came to one of the Trump campaign election violation claims lobbed after Election Day. The Michigan courts ruled that Secretary of State Jocelyn Benson overstepped her authority when she issued unilateral changes for absentee ballots in the state. It all centered on voter signature verification. If she wanted to do that, she was going to have to get the state legislature’s approval. There was a reason why she didn’t pursue this route: Michigan’s state legislature is majority Republican. So, she took this for a spin, and it worked. The Trump campaign’s claim was vindicated, but the damage is done. President Dementia is in the Oval now (via Breitbart):

A Michigan judge ruled last week Secretary of State Jocelyn Benson (D) broke state law when she unilaterally issued rules related to absentee balloting, legitimizing a key claim made by the Trump campaign in its legal challenges to the 2020 election.

In the guidance, Benson said “slight similarities” in signatures on absentee ballots should lead a counter to decide “in favor of finding that the voter’s signature was valid.”

Murray ruled Benson violated the law “because the guidance issued by the Secretary of State on October 6, 2020, with respect to signature matching standards was issued in violation of the Administrative Procedures Act (APA).”

“I’m glad the court sees Secretary of State Benson’s attempts at lawmaking for what they are — clear violations of her authority,” Michigan state Rep. Matt Hall (R) said in a statement.

“If she wants to make changes like these, she needs to work with the Legislature or properly promulgate them through the laws we have on the books — in this case the Administrative Procedures Act,” he continued.

Signature validation rules created without the approval of a legislature was one of the issues the Trump campaign and Republicans claimed was done illegally in the 2020 election.

We all know Democrats play dirty. I think we underestimated how low they would go and didn’t plan for every possible scenario in that regard. We just have to swallow the defeat, but also learn to play dirtier when the time comes. Win at all costs—no matter what. This is a new era, folks. There are no media brownie points for being the so-called ‘better person.’ There’s no return on investment for being the good guy. No one cares about that anymore. This is politics. At some level, the American voter expects whoever is running on whatever ticket to be a little scummy. Yet, this ruling also brings into question whether Biden truly received over 80 million legal votes. I’m not so sure. I would heavily bet against that.