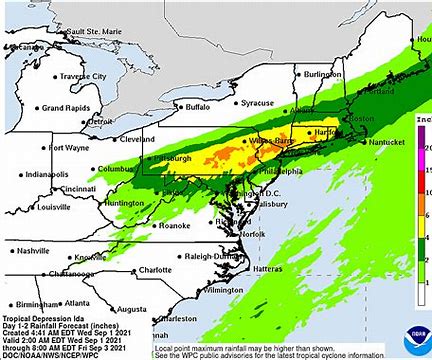 The remnants from Tropical Depression Ida are expected to arrive in New Jersey sometime early Wednesday, dousing the state with 2 to 5 inches of rain, potentially resulting in flash flooding.

The entire state is under a flash flood watch that will go in effect at 8 a.m. Wednesday and continue through 2 p.m. Thursday, according to the National Weather Service.

The highest amounts of rainfall will occur north and west of the I-95 corridor, especially saturated areas that were hit hard by Tropical Storm Henri, forecasters said.

“The system is looking like it’s going to strengthen again by the time it arrives to our region,” said Nick Carr, a meteorologist with the National Weather Service. “Radar is indicating warmer air is pushing further south, creating the potential for severe thunderstorms and possibly isolated tornadoes with how Ida is tracking.”

This means many areas around southern New Jersey may see multiple rounds of isolated to strong and severe wind gusts, which may include the possibility of isolated tornadoes touching ground through Wednesday.

Most of northern New Jersey is likely to experience flooding of rivers, creeks, streams and areas with poor drainage, according to the latest advisory from the weather service.

Ida made landfall in Louisiana and parts of the Gulf Coast states earlier this week as a Category 4 hurricane, resulting in at least four dead after a highway collapsed in Mississippi, millions without power, and flooding remained a significant threat Tuesday as remnants continued to move across the region, according to the National Hurricane Center.

The death toll from Ida is expected to rise in the coming days as officials continue to gather more information.

More than 1 million homes and businesses in Louisiana and an additional 90,000 in Mississippi, Alabama and Virginia were still left in the dark Tuesday morning. The damage from the storm was so severe that officials warned it could take days, possibly even weeks before power is restored.

After having a direct impact on the Gulf Coast near Port Fourchon, Louisiana on Sunday with 150-mph winds, Ida has significantly weakened back to tropical depression status over Mississippi on Tuesday with sustained winds of 30 mph.

Be prepared:Here’s how you can set up severe weather warnings on your phone

It’s current pathing has Ida moving slowly across Tennessee and the Ohio river valley and through the Mid-Atlantic states on Wednesday, the weather service said. There is a high chance of heavy rain and flooding across New Jersey.

Hurricane on the way? Resources to use for New Jersey residents

Rainfall rates of 1 to 2 inches per hour will be possible Wednesday night, according to DiMartino. One to three inches are expected over southern New Jersey and 3 to 6 inches are possible for the rest of the northern Mid-Atlantic.

Winds are not expected to be a factor from Ida, as they will range anywhere from 10 to 20 mph with gusts at times over 30 mph and temperatures ranging around the 70s throughout Wednesday.

“The remnants from Ida will clash with a stalling cold front to bring waves of heavy rain to the region tonight through Thursday,” DiMartino said. “Flash flooding, wind damage, poor travel conditions, and power outages will be a threat.”

Severe thunderstorm warnings and watches, as well as flood advisories are possible when Ida approaches the state, according to the National Weather Service.

The remnants from Ida will exit by late Thursday night or early Friday morning with little to no rainfall expected throughout the day. Scattered cloud cover can be expected with temperatures falling into the low-70s to high-60s.