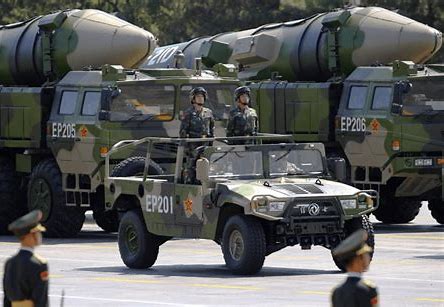 China is the world’s most populous nation, and the world’s second largest economy. Neither fact should be a reason for concern, but add in the fact that China is undergoing a significant military modernization program and that could pose a threat to the security of the United States, as well as other countries. China has become the largest shipbuilder in the world, and currently possesses the largest navy.

Even more worrisome should be the fact that top military officials warned earlier this year that China and Russia have been modernizing their nuclear weapons far faster than the United States. In April, Adm. Charles Richard, head of the U.S. Strategic Command, said in a hearing to congress that Russia has been aggressively engaged in conventional nuclear capability and development.

“It is easier to describe what they are not modernizing – nothing – than what they are, which is pretty much everything,” Richard warned, according to a report from CNN.

Then there was the state of Beijing’s efforts, and Richard added that it was modernizing its nuclear capabilities so quickly that it was difficult to “get through a week now without finding out something we didn’t know about China.”

According to a U.S. Department of Defense (DoD) assessment of China’s military power for congress published last fall, China was estimated to possess a total nuclear warhead stockpile in the low 200s, and that China would seek to at least double its warhead stockpile. Another report from the Stockholm International Peace Research Institute put the number of Chinese nuclear weapons at about 320 warheads.

It isn’t just the numbers of weapons that China may possess, but that there aren’t the fail-safes in place to keep a potential nuclear confrontation from spiraling out of control. On Friday, U.S. Air Force Lt. Gen. Thomas Bussiere, deputy command of the U.S. Strategic Command – which oversees the country’s nuclear arsenal – also warned that China’s development of nuclear capabilities “can no longer be aligned” with its publicly stated claim that it only seeks to maintain a minimum nuclear deterrent.

“There’s going to a point, a crossover point, where the number of threats presented by China will exceed the number of threats that currently Russia presents,” Bussiere said in an online forum. He also warned that Washington and Beijing lack the mechanisms to avert miscommunication, as there are no treaties or dialogue mechanism with China.

For its part, China has taken the stance that its nuclear arsenal is dwarfed by those of the United States and Russia, but that it is also ready for dialogue if Washington were willing to reduce its nuclear stockpile to China’s levels.

According to a State Department fact sheet, as of March 1 of this year, the United State possessed 1,357 nuclear warheads, while Russia has approximately 1,910 nonstrategic nuclear warheads.