The importance of the Oporto Holocaust Museum 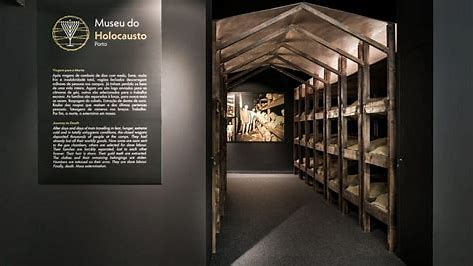 It is a reminder that the phrase “Never again”—about the savage murder of six million Jews in a genocide designed down to the last millimeter—cannot and must not be reduced to an epigraph. (JNS) The new Oporto Holocaust Museum, the only one in the Iberian Peninsula, has already been referred to by Timeout magazine as the best museum in the city. Oporto is one of Europe’s oldest and most popular tourist destinations, and before the COVID-19 pandemic, it received hundreds of thousands of European tourists every year.

As a daughter of the rabbi who led the Jewish community of Lisbon for 50 years, born in a country where Jews were expelled five centuries ago—and living in a Europe where more and more people hate Jews, Judaism and Israel—I am infused with a sense of security from the museum. It is a reminder that the phrase “Never again”—about the savage murder of six million Jews in a genocide designed down to the last millimeter—cannot and must not be reduced to an epigraph.

I have read the works of Elie Wiesel, Samuel Pisar, Primo Levy and Anne Frank. I was privileged to be friends with someone who breached the Warsaw Ghetto wall. I have interviewed survivors. I met Imre Kertész.

I have visited the Nazi extermination camps, where the air smells of corpses and remnants of dead Jews were on display: stacks of suitcases, shoes, artificial limbs, glasses, crutches, human hair used for fabrics. I have been to Yad Vashem and Kibbutz Lohamei HaGeta’ot in Israel, and many other Holocaust museums elsewhere in the world, viewing photos of so many tattooed arms with deadly numbers. I have pored over archives and scoured libraries, examining blood-stained documents.

To be remembered, the Shoah needs to be known and deeply understood. Understanding is perhaps the only way not to allow the crime to be repeated. “Never again” translates into solidifying the truth with justice, with the strength that does not come from weapons, but from actions such as the building of the Holocaust museum, run by Oporto’s Jewish community, whose parents, grandparents and other family members were direct victims of that tragedy: enslaved, gassed, shot, buried in mass graves, forced to play the violin in Theresienstadt, subject to Mengele’s experiments, escaping Treblinka in the middle of the night.

Built by complementary teams of experts in areas as diverse as history, design, architecture, civil construction and carpentry, under the direction of the board and local rabbinate, the Oporto Holocaust Museum was erected in just two months. In cooperation with B’nai B’rith International and Holocaust museums around the world, it portrays Jewish life before the Holocaust; Nazism and Nazi expansion in Europe; the ghettos, refugees, concentration, labor and extermination camps; liberation; the Jewish population in the post-war period; the foundation of the State of Israel; and the Righteous Among the Nations.

Visitors will have the opportunity to see a reproduction of the Auschwitz dormitories, a room of names, a memorial flame, a study center and, in the image of the Washington Holocaust Museum, photographs and video footage of the period before, during and after the tragedy.

The museum also contains archives relating to refugees who passed through the city of Oporto, including official documents, testimonies, letters and hundreds of individual files. Two Torah scrolls offered to the synagogue in Oporto by refugees who had arrived in the city after the war are also on display.

The new museum is part of a strategy of the local Jewish community to combat anti-Semitism—a strategy that also includes school visits to the Kadoorie Mekor Haim Synagogue; four films about the history of Jews in Portugal (as part of an interfaith project with the Diocese of Oporto); pedagogical training programs for secondary-school teachers and other civil servants on themes related to Judaism, the history of the Jews and the Holocaust; and visits to the city’s Jewish Museum to observe the historic and cultural importance of the Jews in Portugal and of Portuguese Jews worldwide, with particular emphasis on the Jewish community in Oporto, which is older than the foundation of Portugal.

The board of directors of the Jewish community of Oporto has it right when it says, “Jews are off the political agenda in many countries, as they are seen as plutocrats of an obscurantist religion and culture with their own state in Israel. Jews don’t count, and the Holocaust itself has been instrumentalized mainly to combat discrimination in general, although nine out of 10 victims were Jewish. Nazism also persecuted other minorities, but it just feared the Jewish culture that was 3,000 years old and present on all continents. The Jews were considered as the greatest threat to the ‘Master Race.’ Hatred of Jews extended far beyond the territories occupied by Germany. The Holocaust aimed to exterminate the Jewish people!”

One thought on “The importance of the Oporto Holocaust Museum”