The Daily Mail Reports: “The Streets of Mariupol are being Turned into Cemeteries. Makeshift Graves Appear Across the Besieged Port City as Victims are Buried Under Rubble with Relatives Unable to Retrieve Bodies Due to Heavy Russian Shelling 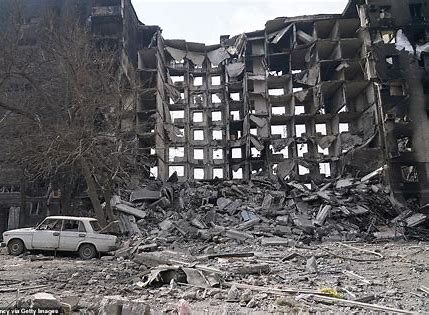 By JAMIE PHILLIPS FOR MAILONLINE
27 March 2022

The streets of Mariupol are being turned into cemeteries with makeshift graves appearing across the besieged port city.

Bodies of both civilians and soldiers are becoming buried under the rubble of destroyed buildings or left out on the streets with rescuers unable to retrieve victims and give them a proper burial due to the incessant bombing.

It comes as the UN said on Friday that it had received more information regarding mass graves in the city—one of which is thought to hold up to 200 bodies.

Earlier this month, graphic images showed mortuary workers digging 25-metre trenches at one of the old cemeteries in Mariupol, and making the sign of the cross as they pushed dead bodies wrapped in carpet or bags over the edge.

Residents have also had to dig roadside graves opposite defaced residential buildings, with those not killed by the shelling having to endure a shortage of medical supplies, water and electricity.

Mariupol has seen some of the most intense fighting since Putin ordered his armies into Ukraine on February 24 as part of what the Russian strongman branded a ‘special military operation’.

Russian forces have been shelling the city indiscriminately, razing large swathes of the city.

More than 1,200 civilians are thought to have been killed as Moscow has been ‘terrorising’ the captive population with increasingly brutal attacks.

It includes around 300 people thought to have died when a devastating Russian airstrike destroyed a theatre being used as temporary refuge.

Matilda Bogner, head of the UN human rights team, said it had ‘increasing information on mass graves that are there’.

She did not elaborate further on the evidence, adding that it was not clear whether the dead were soldiers or civilians.

The extent of the shelling is making it increasingly difficult to verify the number of victims, with bodies having to be left out in the streets.

She added: ‘The extent of civilian casualties and the extent of damage raises serious concerns and suggests strongly there have been violations of international humanitarian law and in particular of indiscriminate attacks.’

It comes as a group of Chechen fighters have been seen on video wildly firing heavy machine guns towards residential buildings in the city.

The soldiers, dressed in camouflaged military gear, pumped their fists to the camera and could be heard shouting ‘allahu akbar’.Chechen fighters shout ‘Allahu Akbar’ and fire shots at building.

On his Telegram channel, Kadyrov claimed his fighters were clearing ‘the territory of the Nazis’ – parroting a line used by Russian president Vladimir Putin and his propaganda machine to justify the invasion of Ukraine.

Meanwhile, Mariupol’s mayor Vadym Boichenko has said the situation in the city remains critical, with street fighting taking place in its centre.

Mr Boichenko added that he has spoken with France’s ambassador to Ukraine about options for evacuating civilians after Emmanuel Macron said he would propose to Russia a plan to help people leave the encircled city.

In what could see NATO soldiers on the ground in Ukraine for the first time since the start of the war, Macron announced a bold plan with Turkey and Greece to evacuate ‘all those who wish to leave Mariupol’, adding he would discuss it with Putin soon.

However, diplomatic tensions have risen after US President Jo Biden has been slammed for his ‘unscripted’ declaration that Putin ‘cannot remain in power’.

The remark, which the White House scrambled to walk back as the Kremlin expressed fury, came at the end of an otherwise resolute and fiery speech rallying the free world to unite in opposition to autocracy and support of Ukraine.

Biden’s remark could also diminish Putin’s interest in compromise and increase his temptation to escalate in Ukraine, ‘because if he believes he has everything to lose then he’ll believe he has nothing to lose,’ Haass said.

Before Biden could even board Air Force One to begin the flight back to Washington, his aides were rushing to claim that he hadn’t been calling for an immediate change in government in Moscow.

Russian troops are trying to encircle Ukrainian forces fighting in the separatist regions in the eastern part of the country, British intelligence chiefs said, as Russia continues its attacks on Ukraine.

Vladimir Putin‘s forces are advancing southward from the area around the city of Kharkiv and north from the port city of Mariupol to the Donbas region in an attempt to surround Ukrainian troops, the Ministry of Defense said in an intelligence briefing today.