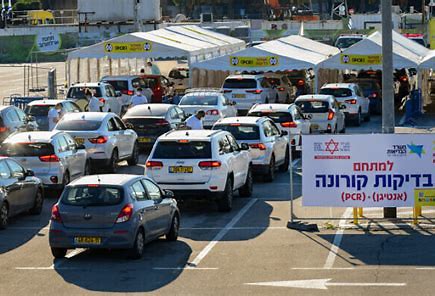 A day after the PM announced a fresh booster dose would be made available to over-59s and medical staff, nearly 20,000 reportedly get vaccine, with nearly 100,000 more signing up

Thousands of people in Israel got their fourth dose of Pfizer’s coronavirus vaccine Monday, as the country became the first in the world to begin distributing extra boosters to its elderly population and health workers.

With case numbers continuing to rise, Israel is pinning its hopes on beating back an expected Omicron-driven wave by giving an extra boost of vaccine protection to its most at risk populations. On Sunday, Prime Minister Naftali Bennett announced that all Israelis aged 60 and over and medical workers would be eligible for the shots, joining those with immunosuppression.

As of Monday evening, some 18,000 doses were administered to people who had already gotten three shots, Channel 13 news reported. Some 95,000 people signed up for appointments to get a fourth shot over the course of the day, according to Channel 12.

The figures could not be immediately verified, but Bennett said in a statement that 100,000 people had either gotten the fourth dose or signed up for one, calling it a “great success.”

“The vaccines protect us from serious illness and needing to quarantine, and the public understands that,” he said in comments provided by the Prime Minister’s Office.

Dr. Miri Mizrahi Reuveni, deputy head of the Maccabi HMO, told Army Radio that vaccination centers had seen a robust response on the first day of the drive.

“It was only made available yesterday, and today more than 20,000 made appointments and many have already gotten the shot,” she said. “People understand the importance of the booster in the current situation.”

On Tuesday, Magen David Adom medics will begin fanning out to old age homes to distribute the shots there as well.

While Israel is racing ahead in rolling out a fourth dose, much of the rest of the world has taken a wait-and-see approach, with no solid data yet on the effects of a fourth shot. Last week, a hospital near Tel Aviv began a small-scale trial among its medical staff, but no results have yet been published.

Salman Zarka, who is heading up Israel’s response to the pandemic, admitted Monday that little is known about the fourth dose, but urged those eligible to get it anyway.

“We’ve seen that the amount of antibodies is always dropping and so recommend that you, 60-and-overs and medical staff, get the fourth dose,” he said at a press conference. “I’ll say transparently, the data we have on a fourth shot is limited. Many experts think it provides extra protection to populations at risk.” Coronavirus czar Prof. Salman Zarka seen during a visit at a Safed hospital on August 24, 2021. (David Cohen/ Flash90)

Zarka later told the Kan broadcaster that it was too early to discuss making the fourth shot available to others as well, but predicted it would be discussed in the near future.

Because Israel also sprinted ahead of most other countries with its initial vaccination drive and booster campaign, some believe the protection from that third shot is liable to wane earlier than elsewhere.

Around two-thirds of Israel’s population of nearly 9.5 million have received at least one dose of the vaccine, and nearly 4.3 million Israelis have received all three doses, according to the latest Health Ministry figures.

“Israel will lead the way in administering a fourth vaccine (dose) to the Israeli people,” Bennett said in a statement. “Israel’s strategy for overcoming Omicron is clear: The greater the wave, the greater the protection we will need to overcome it.”

Nonetheless, the country is facing what many expect to be a powerful onslaught of new virus cases, with Bennett on Sunday predicting that 50,000 Israelis a day could be infected at the height of the wave, which would be some five times the previous daily high. Others have predicted 10,000 to 30,000 cases a day in coming weeks.

Health Minister Nitzan Horowitz vowed Monday that a lockdown or other significant restrictions were not up for discussion, but Zarka told Kan that if hospitals are overwhelmed with thousands of seriously ill patients, a lockdown would be in order.

“When I speak about a lockdown, I don’t mean the third lockdown. I mean a tight lockdown, the first lockdown,” Zarka said, referring to the country’s initial stay-at-home orders in the spring of 2020, which were strictly enforced.

Israel recorded 6,570 new cases on Sunday and as of Monday late afternoon, another 6,474 cases had been confirmed, putting the number of active cases at over 41,000. However, only 210 patients are hospitalized, including 108 people in serious condition.

Rather than tighten restrictions, the government has moved to loosen many of them under pressure from shop owners and others.

According to Channel 12 news, the government is considering doing away with the Green Pass system, which gave vaccinated individuals greater freedom of movement, due to data showing that being vaccinated does not offer the same level of protection against catching or spreading the Omicron variant.

However, Horowitz backed the program, telling Channel 12 news it “plays an important role.” Cars line up at a drive-through COVID-19 testing center in Tel Aviv, on January 3, 2022. (Avshalom Sassoni/ Flash90)

The government is also considering changes to its testing regime, given complaints of extremely long wait times for tests. Among ideas under consideration are allowing vaccinated individuals to test themselves at home, using antigen rapid tests. Officials may also restrict the more reliable PCR tests for only individuals who are older, have preexisting conditions or are unvaccinated.

According to Horowitz, Israel performed a record 300,000 tests on Monday. He said that as soon as at-home tests are okayed, lines will disappear.

“We need to move over to antigen tests, you can distribute rapid checks to every home in Israel,” he told Army Radio. “True, they are not as accurate as PCR tests, but we need to know the most we can with the tools we have.”