Junior interior minister expresses horror over act tarnishing memory of late politician: ‘To deface her memorial is to deface France’

The memorial to Veil at Peros Guirec in the western Brittany region was found to have been daubed with the Nazi insignia in the morning. An investigation has been opened.

Veil, born in 1917, survived the Holocaust to become a celebrated figure in French politics, fighting for abortion rights, battling antisemitism and also serving as speaker of the European parliament.

As a teenager she was deported to Auschwitz and lost her mother, father and brother in the camps.

Veil died in 2017 and in 2018 President Emmanuel Macron decreed she should have the honor of a final resting place in the Pantheon in Paris that holds the tombs of France’s greatest heroes.

“Simone Veil is a French and global figure in women’s rights, Europe and the fight against antisemitism,” junior interior minister Marlene Schiappa wrote on

“To deface her memorial is to deface France! These heinous acts must not go unpunished,” she added.

The memorial, which was inaugurated in 2017, has now been cleaned.

The Ouest-France newspaper said it was the third time the memorial had been targeted within the last week. It had previously been smeared with mustard and excrement. 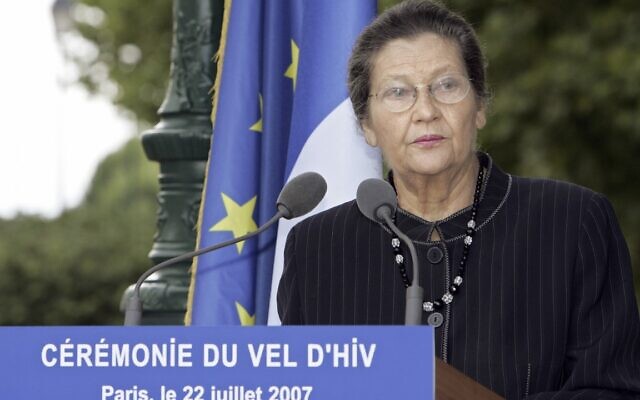 In this July 22, 2007 file photo, Simone Veil delivers a speech in Paris, during a ceremony to mark the 65th anniversary of a World War II roundup of French Jews, at the former site of the Velodrome d’Hiver bicycle stadium (AP Photo/Michael Sawyer, File)

The vandalism comes following a furor over a sign displayed at a protest in the eastern city of Metz at the weekend that police said was clearly antisemitic.

The sign denounced Macron’s enforcement of a health pass in France to encourage people to get vaccinated and contained the names of several prominent politicians, businessmen and intellectuals in France, most of them Jewish.

The teacher suspected of brandishing the sign, which went viral on social media, will go on trial next month accused of seeking to incite racial hatred.