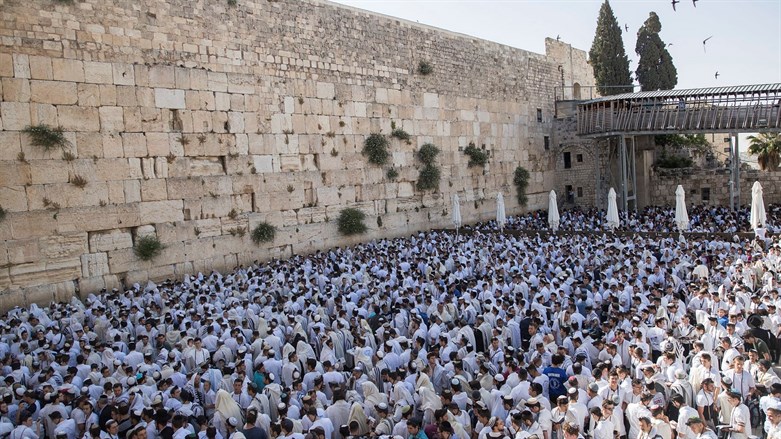 According to a new survey, 47 percent of the Jewish population of Israel supports the Western Wall Compromise Plan (also known as the Kotel Outline), with just 32 percent opposed to the Plan.

The survey was conducted by Panels Politics on behalf of the Institute for Research on Judaism and Zionism.

The results were somewhat confused, however, by parallel findings that a majority of Israelis (59 percent) don’t actually know what the Western Wall Compromise Plan is. Even among the haredi sector, just 53 percent were familiar with the Plan, with younger people less likely to know what it’s all about than older (just 36 percent of haredim under the age of 30 knew what the Plan is).Related articles:

The issue is one that has been highly politicized, with politicians from across the spectrum taking one side or another and promoting their positions among their electoral base. However, the survey revealed that a majority of the population are not at all keen on having politicians weigh in on the issue, with an overwhelming 94 percent of respondents saying that they did not think that politicians should have the final say on whether the Plan is implemented.

When asked who should have the deciding voice, 50 percent of those surveyed said that they think the general public itself should decide. Sixty-four (64) percent felt that the Chief Rabbinate should not be entrusted with the decision.

“The Israeli public believes that the Kotel Plaza belongs to the people and that it is primarily a religious site,” concluded Daniel Goldman, founder of the Institute for Research on Judaism and Zionism. “That is why the general public supports the implementation of the Compromise Plan which enables every Jew, whoever he is, to pray in the manner of his choosing, at this holy site; it is also why the general public thinks that politics has no part to play here, and that the people as a whole should decide. The results of this survey send a clear message to politicians and ministers: Listen to the people and find a solution that enables all streams of Judaism to pray in their own way at the Kotel Plaza.”

[EDITOR:] This last comment is expressly the opinion of Daniel Goldman, founder of the Institute for Research on Judaism and Zionism. We at JNews however strongly disagree with this opinion on the grounds that the opinion is NOT an accurate conclusion of the data supplied in this article. Most notably, with 59% of those surveyed not even understanding the issue, (as stated above) it skewed the entire sampling because 59% of respondents are unable to present an accurate opinion.

Additionally, if 57 percent see the Kotel as a religious symbol, it is highly unlikely that they would NOT agree that the guiding decision should be based in authentic religion. Also, the 64 percent of the survey opposed to the idea that decisions on the Kotel be placed in the hands of the Chief Rabbinate, might be more reflective of a prevailing distrust of the Chief Rabbinate to make decisions that reflect purely religious ideals without interjecting politics.

The only way to garner a more accurate—albeit still imperfect—result on this survey, would be to split the scope of the survey into independent smaller surveys and then analyzing the results to provide a more wholesome image of the true popular opinion. [YB]