Rescuers Focus on Detecting Sounds of Survivors in Rubble 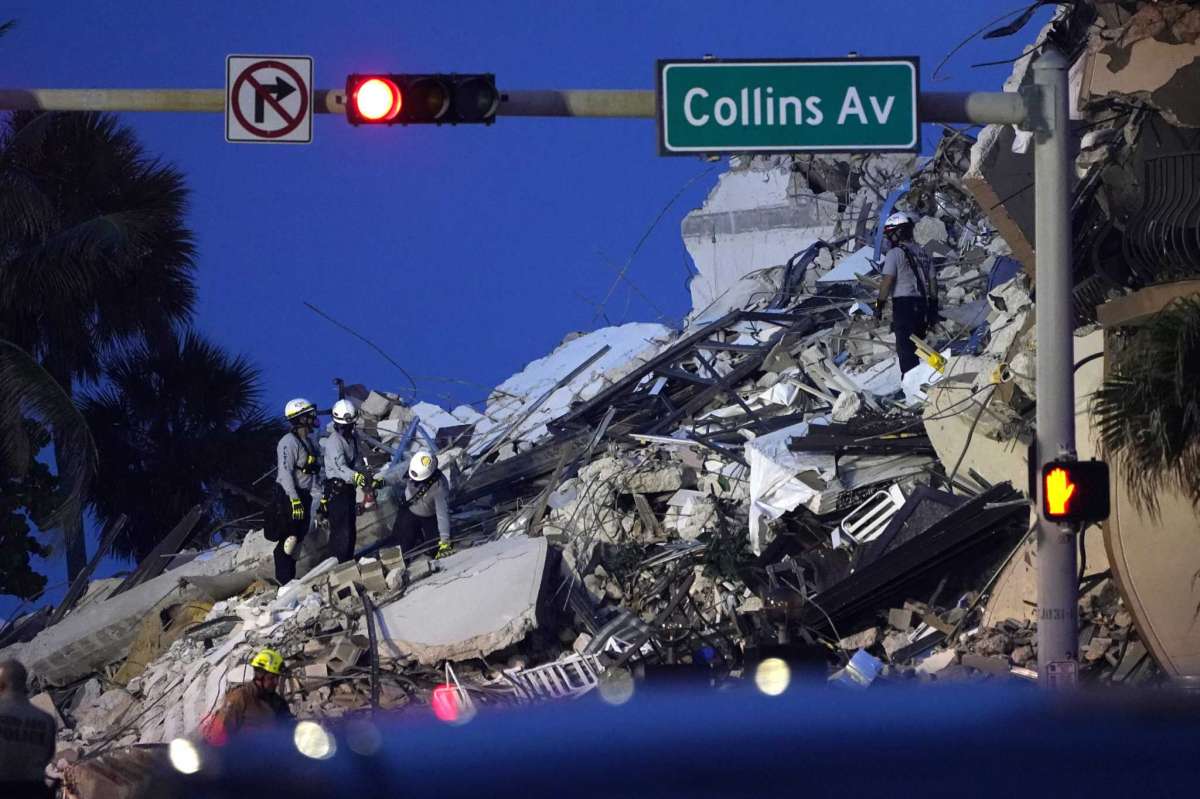 By FREIDA FRISARO and TERRY SPENCER21 minutes ago

SURFSIDE, Fla. (AP) — Search and rescue teams worked through the night, encountering rainstorms and small fires in the rubble, hoping to detect any sounds coming from survivors following the collapse of a beachside condominium complex near Miami.

The crews, which include some 130 firefighters working in teams, are approaching the pile from above and below as they search for any signs of life in what had been a wing of the Champlain Towers South in Surfside, Florida.

Crews have heard some tapping and other noises, but Assistant Miami-Dade Fire Chief Raide Jadallah emphasized that the rescuers don’t know whether the sounds are human-made or just caused by the settling of the huge mass of concrete, metal and other belongings lost in the collapse.

“Any time that we hear a sound, we concentrate in that area,” Jadallah said during a news conference Friday morning. “It could be just steel twisting, it could be debris raining down, but not specifically sounds of tapping or sounds of a human voice.”

Heavy cranes are removing debris from the pile using large claws, creating a sound of crashing glass and metal as they pick up a haul and dump it to the side. At the same time, firefighters are tunneling from below, using saws and jackhammers, to search for pockets in the rubble, Jadallah said.

Surfside Mayor Charles Burkett said the removal of the debris should make it safer for rescuers to tunnel into pockets where survivors might be trapped.

“Right now we are picking up dangerous pieces that look like they could fall on our search and rescue guys,” he said.

Periodic downpours, as well as strong winds, were adding to the challenges. A fire somewhere deep within the rubble was also a concern. “We’re working around that, it’s not stopping us,” the mayor said.

Levine Cava said it is “incredibly motivating” to watch the search and rescue teams.

“This work is being done at extreme risk to these individuals. Debris is falling on them as they do their work,” she said. “We have structural engineers on site to ensure that they will not be injured but they are proceeding because they are so motivated and they are taking extraordinary risk on the site every day.”

Jadallah said firefighters know the risk, but are driven by the hope of finding survivors.

“This is the risk that we take: it’s the risk vs. benefit,” he said. “Every time that we have that belief that there’s hope with personnel that are trapped, we do risk our lives.”