Report: Natanz Blast was Caused by a Remotely Detonated Device 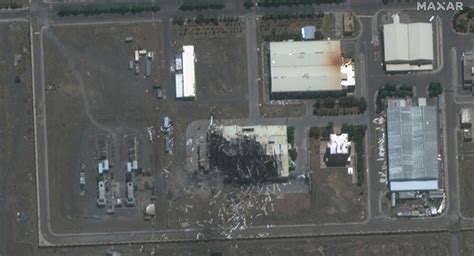 Detonation took out both the main and backup electrical systems, according to “The New York Times” • Attack was “beautiful,” says Iranian Parliament Energy Committee head.

An explosive device that had been smuggled into the Natanz uranium enrichment facility in Iran was detonated remotely, destroying primary and backup electrical systems, The New York Times reported on Monday.

The head of the Iranian Parliament’s Energy Committee, Fereydoun Abbasi, seemed to confirm that account when he told Iranian state television on Monday that “the enemy’s plot was very beautiful. I’m looking at it from a scientific point of view. They thought about this and used their experts and planned the explosion so both the central power and the emergency power cable would be damaged.”

Atomic Energy Organization of Iran spokesman Behrouz Kamalvandi said he had fallen into the large hole created by the blast, resulting in multiple injuries.

Reuters also quoted Iranian government spokesman Ali Rabiei as saying that “Sunday’s sabotage occurred in a power cable duct leading to the centrifuge machines. This was not an external attack and the location of the sabotage has been clearly determined.”Subscribe to The JNS Daily Syndicate
by email and never miss
our top stories

Intelligence officials cited in the Times report estimated that it would take “many months” for Iran to repair the damage.

U.S. officials speaking on background told the Times they were concerned the attack would “drive the nuclear program more deeply underground, where it would be hard to reach.”

Meanwhile, voices in Iran continued to call for revenge, a day after Iranian officials said the regime would retaliate against Israel. Criticisms have also grown inside Iran over the regime’s inability to safeguard its nuclear site; Natanz was the scene of a previous blast, widely considered to be an act of sabotage, in July 2020.

Eshaq Jahangiri, Iran’s vice president, said it was time to hold those guarding Natanz responsible, describing the attacks as having “catastrophic consequences” for Iran’s reputation, economy and security, the Times said.

Reuters quoted Iranian Foreign Minister Mohammad Javad Zarif as saying on Tuesday that Israel had made a “very bad gamble” by attacking Natanz, adding that the blast would strengthen Iran’s position in its talks to re-enter the 2015 nuclear deal with world powers.

“Israel played a very bad gamble if it thought that the attack will weaken Iran’s hand in the nuclear talks,” he said during a joint press conference with his Russian counterpart in Tehran.

“What happened in Natanz makes it possible for Iran to legally do whatever it takes to … compensate for this terrorist stupidity,” said Zarif. “I assure you that in near future, the Natanz site will move forward with more advanced centrifuges.”

Iran’s official MEHR news agency said on Tuesday that the country’s Deputy Foreign Minister for Political Affairs, Seyyed Abbas Araghchi, had departed for Vienna to take part in a new round of talks with world powers, indicating that negotiations remained on track to continue despite the blast.

On April 10, a day before the blast at Natanz, Ali-Akbar Salehi, head of the Atomic Energy Organization of Iran, told Iran’s Channel 1 that the Islamic Republic had activated a full chain of 164 IR-6 centrifuges at the site, according to MEMRI.

Salehi added that the facility is scheduled to move deep into the mountains of Natanz by the end of the year. He added that Iran has surpassed a “technological threshold” and can now design centrifuges on its own, without resorting to reverse engineering.

Meanwhile, Maj. Gen. (ret.) Amos Yadlin, a former head of IDF Military Intelligence, tweeted in Hebrew on Tuesday that when Israel takes action in an “enemy land,” it must always consider three central factors: “The expected achievement, the enemy’s response and escalation potential, and the impact on Israel’s relations with its vital ally.”

Yadlin added that “48 hours after the explosion at the electrical system at the Natanz enrichment site, it is clear that the attack is not the end of the nuclear program, unlike the attacks on the reactors in Iraq and Syria. The distributed and ongoing Iranian project requires a lengthy campaign of operations that delay and disrupt it, thereby delaying Iran’s reaching the nuclear threshold.”

Yadlin said international media reports linking Israel to the attack, as well as “irresponsible leaks from here,” lead him to expect a belligerent Iranian response, but added that he believed that “it will be measured, out of a desire to control the escalation.”