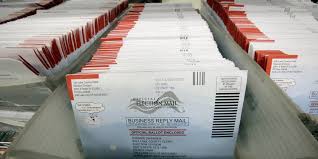 The Election Issues Will not Go Away.

“Mass-mail balloting is a step backward for American elections,” PILF President and General Counsel Christian Adams said in a statement.Image

The Public Interest Legal Foundation says that tens of thousands of mail ballots in Clark County Nevada were returned undeliverable to incorrect or outdated addresses during the 2020 general election contest.

“Clark County 2020 General Election data show that 92,367 mail ballots were returned undeliverable to wrong or outdated addresses, according to records disclosed to PILF,” the organization reported, noting that Joe Biden won the state of Nevada by 33,596 votes.

“Mass-mail balloting is a step backward for American elections,” PILF President and General Counsel Christian Adams said in a statement. “There are millions of voter registration records with unreliable ‘active’ address information that will ultimately send ballots to the wrong place in a mail election. H.R. 1 does more harm than good for the American people and will leave them at a constant disadvantage to correct election system errors which ultimately impact their abilities to vote in a timely manner.”