Project Veritas Discovered the DOJ Has Been Illegally Spying on Journalists 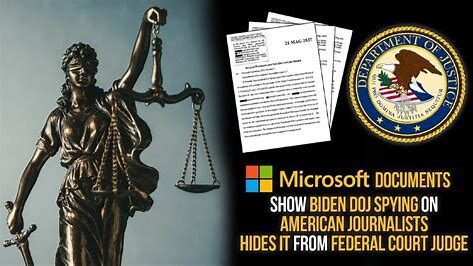 Microsoft Corporation legal documents obtained by Project Veritas show that after a U.S. District Court Judge rejected the DOJ’s argument to ignore Project Veritas’ “journalistic privileges,” the DOJ went behind the judge’s back to obtain an extension on two sealed non-disclosure orders from a magistrate judge to conceal the fact they already had unsupervised and unfettered access to privileged emails and contacts of eight Project Veritas journalists.

Judge Torres had ruled that prosecutors must operate under the supervision of a Special Master to ensure first amendment protections are upheld for Project Veritas journalists and their source material.

These documents reveal that the government not only ignored that order, but also attempted to hide the fact they had obtained emails for time periods far outside the scope of the investigation.

The Department of Justice then muzzled Microsoft from disclosing these orders via a series of secrecy orders signed by magistrates.

The documents further reveal the DOJ then went behind U.S. District Court Judge, Analisa Torres’, back to obtain extensions on the gag-orders on Microsoft from magistrate judges after Judge Torres ruled Project Veritas was entitled to “journalistic privileges.”

Despite multiple opportunities to do so, the DOJ has not publicly disclosed the orders, warrants, or subpoenas to Judge Torres or Special Master Judge Barbara Jones – who was appointed by Judge Torres to protect Veritas’ “journalistic privileges” from potential DOJ overreach. Judge Torres ruled that the DOJ’s investigation must be overseen by Judge Jones and ordered the DOJ not to review any materials seized from Project Veritas without Judge Jones’ approval.

Paul Calli, an attorney for Project Veritas, fiercely opposed the actions from the DOJ which he called an act of “violence” to the First Amendment.

In a motion filed Tuesday, Calli argued, “By the time [Project Veritas] filed the Motion to Appoint a Special Master, the government already had the opportunity to review Project Veritas’ journalistic and attorney-client privileged materials.” Based on preliminary research data, the SDNY (Southern District of New York) appears to be in possession of nearly 150K documents they should not have. In addition to the emails, the SDNY obtained over one thousand contacts from journalists that they also failed to disclose to Judge Torres or to the Special Master.

The surveillance culminated in a search warrant seeking every email sent to or from Project Veritas founder and CEO, James O’Keefe, for a three-month period, along with every contact he had ever saved.

According to an order the DOJ sought to keep secret, to justify obtaining access to journalists’ emails, the Justice Department appears to have argued “there is probable cause to believe the email account(s), maintained at premises controlled by Microsoft Corporation, USA, contain evidence, fruits, and instrumentalities of crime.”

Each order, warrant and subpoena were accompanied by a Non-Disclosure Orders (NDO) which barred Microsoft from disclosing the SDNY’s surveillance for one year, claiming without evidence, that disclosure could lead to destruction of evidence by Project Veritas. Multiple NDOs were set to expire in January 2022.

On December 8, 2021, however, Judge Torres, over the opposition of the SDNY, granted Project Veritas’ request to appoint a Special Master to supervise the SDNY’s review of materials seized from journalists to protect the news organization’s “journalistic privileges,” among other things.

The SDNY’s final act of secrecy was seeking yet another round of renewals, prompting Microsoft to point out in a scathing unfiled motion that the government’s claims that Project Veritas might destroy evidence if the surveillance were disclosed were unsupportable.

Microsoft pointed out that the DOJ’s investigation was already public and no proof that Project Veritas would destroy evidence had been offered by the SDNY.