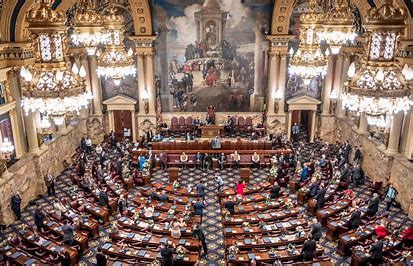 The Pennsylvania Senate on Wednesday passed a bill that would amend the state constitution to require that voters present identification each time they cast a ballot.

The measure, SB735, passed in a 30-20 vote, mostly along partisan lines. The proposal was backed by all Republicans and a single Democrat.

Currently, state voters are only required to present identification the first time they vote at a polling station. The measure would require some form of verification every time a ballot is cast, including when voting by mail. It also proposes amending the voting age in the Pennsylvania Constitution from 21 to 18, making it consistent the U.S. Constitution.

Constitutional amendments can be made if two-thirds of both chambers of Congress agree on a proposal and it is ratified by three-fourths of states, or if a convention is called by two-thirds of state legislatures backing the proposed amendments.

“It’s clear that Pennsylvania citizens want this commonsense requirement for secure elections,” Republican state Sen. Bob Mensch said in a statement of the bill. “We desperately need to settle on procedures that restore faith in our elections and aren’t subject to constant change. Approval of this measure will ultimately put the matter before voters and, if approved, into the state Constitution.”

State Sen. Steve Santarsiero, a Democrat, meanwhile, argued that amending the state constitution shouldn’t be seen as a solution “every time we may disagree on a particular issue of policy.”

“This is something that the people of Pennsylvania are begging for,” Ward said.

Others expressed concern over the lengthy process that accompanies obtaining proper identification—something critics argue could discourage some from participating in the electoral process.

“There is very little evidence of systemic voter fraud in Pennsylvania,” Sen. Sharif Street, a Democrat, said. “We should all be working to try and get as many people to participate in the electoral process as possible.”

Similarly, the nonpartisan Committee of Seventy, which opposes the bill, argued in a statement that voter fraud is “exceedingly rare,” and that sufficient voter ID requirements are already in place.

Just days earlier, the Pennsylvania state House approved House Bill 1300, that would include a requirement that voters present identification, among other measures relating to polls, audits, and procedures.

In touting the bill, House Republicans said it’s necessary to restore what they described as integrity to the election process in the commonwealth. Other lawmakers said their constituents had pushed them to vote on the bill.

Democrat Gov. Tom Wolf has said several times that he will veto any election-related bill. On June 22, Wolf wrote on Twitter that he wouldn’t sign the House bill into law, saying, “I will veto this bill if it reaches my desk in its current form.”