NYC Board of Elections Pulls Back Preliminary Mayor’s Race Results 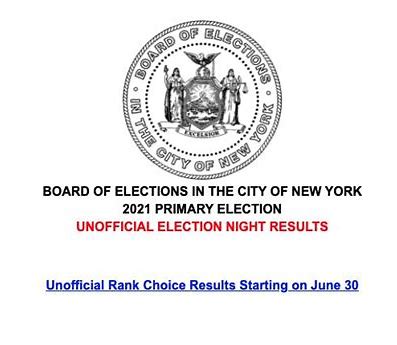 Welcome back to Election issues 2.0 (ED)

New York City’s Board of Elections has pulled back the preliminary results it released on Tuesday that showed Brooklyn borough chief Eric Adams’ lead in the mayoral race was narrowing after it was revealed that test ballots had not been cleared from its computing system before the tabulations in the 13-candidate race were released.

The board had posted an unofficial tabulation of the in-person ballots that were cast in the ranked-choice race, raising questions when the results showed more than 140,000 ballots than had been shown in the previous count, the publication The City reported Wednesday.

The BOE is planning to run the tabulation again and only count the votes that were placed in person. A full tally including absentee ballots, along with people who voted early, is still coming, and complete results are not expected until the week of July 12, at the earliest.

Any absentee ballots with errors such as unsigned envelopes will be returned to voters who will be allowed to “cure” the errors. They must return their ballots to the board by July 9, or they will not count.

The numbers that were released showed former sanitation commissioner Kathryn Garcia was now behind Adams by almost 16,000 votes. However, in the board’s tally on June 22, Adams was holding a comfortable lead, trailed by Maya Wiley and Garcia.

“The cast vote record will be re-generated and the RCV rounds will be re-tabulated,” the BOE said in a statement Tuesday night. “The Board apologizes for the error and has taken immediate measures to ensure the most accurate up-to-date results are reported.”

The BOE said the discrepancy was caused by a technical error that was caused when a test run of the computing system wasn’t cleared.
New York voters got to pick up to five candidates, ranked by order of preference, on their ballots. In each round of counting, the candidate having the fewest first-ranked votes is to be eliminated, with ballots that were cast for that candidate to trickle to that voter’s second-place choice, and then the process is repeated until there are two candidates left, with the one who accumulates the most votes winning the primary.

The official results of the mayor race, along with others involving City Council and for the city comptroller not expected to be made final until the middle of July.

Adams Tuesday night called out the BOE’s mistake as “unfortunate” and said it is “critical that New Yorkers are confident in their electoral system, especially as we rank votes in a citywide election for the first time. We appreciate the Board’s transparency and acknowledgment of their error. We look forward to the release of an accurate, updated simulation, and the timely conclusion of this critical process.”

The City Council’s Black, Latino, and Asian Caucus also said the BOE did not post “timely and accurate results and pointed out that “our members warned the public for months that the city was ill-prepared to execute elections under the new ranked-choice voting system and the concerns they raised continue to be borne out by facts.”

“Today, we have once again seen the mismanagement that has resulted in a lack of confidence in results, not because there is a flaw in our election laws, but because those who implement it have failed too many times,” Wiley said.

“Every ranked-choice and absentee vote must be counted accurately so that all New Yorkers have faith in our democracy and our government,” she said.

Adams has already questioned the voting process, and several of his allies filed a lawsuit last winter to block the ranked-choice process. A judge dismissed the legal action.