No Shot, No Proof, No Service: NYC Businesses Begin Checks 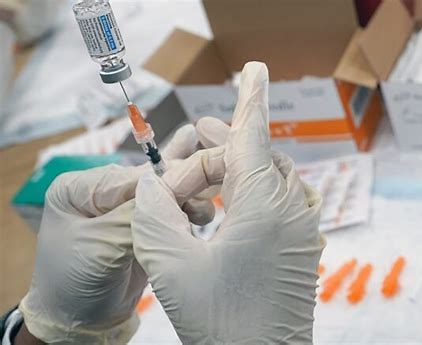 Fascism Begins: The Selection of Who Gets and Who Doesn’t. The Co-operative ones are willing to accept Marxist policy; they get. People who want freedom of choice, DON’T GET

NEW YORK (AP) — People dining indoors at New York City’s restaurants, browsing its museums or sweating in its gyms had to show proof Tuesday that they were at least partially inoculated against COVID-19 as the city began the nation’s largest effort yet to exclude the unvaccinated from public places.

Signs on the front door and windows of The Stop Inn, a Queens diner, warned patrons arriving for breakfast that they had to show proof of at least one vaccine shot to be allowed to dine inside.

Still, Norbu Lama, 17, said he was surprised when a server politely asked for his vaccination card soon after he slid into a booth with his parents and sister.

“We didn’t know we had to bring it,” he said. The server appeared relieved when Lama and his family presented copies of their vaccination cards on their phone, Lama said.

The vaccination mandate, announced two weeks ago by Mayor Bill de Blasio, aims to persuade more people to get vaccinated or else miss out on city amenities like restaurants and bars, movie theaters, bowling alleys, concert halls, indoor sports arenas, and other entertainment venues.

Employees of those businesses also must be vaccinated, with holdouts facing the possibility of being fired if they refuse.

The measures are also fraught with complications, as restaurant servers, bartenders and ticket agents become the frontline enforcers for vaccination rules. Skittish about losing business, but mindful that another economic shutdown could be disastrous, some restaurant and bar owners are embracing the the mandates as a way to control the virus and keep their doors open.

Others — particularly in parts of the city where people have resisted getting the vaccine — worry it will be a fatal blow to businesses that were prevented for months last year from serving patrons indoors.

“We do not want to go back to restrictions,” de Blasio said at a virtual news conference Tuesday. “The key to our progress is vaccination.”

The city makes exceptions for children under 12, who now don’t qualify for the vaccine. It is also exempting certain workers, like players on visiting professional sports teams.

The number of people getting shots has ticked upward again in the city as the more contagious delta variant that has fueled a surge in infections and hospitalizations.

New York City averaged 2,000 new cases of the coronavirus a day over the past seven days, up from around 200 a day in late June.

Some cities and states, as well as the federal government, have moved more aggressively to get more people inoculated or have them face consequences such as regular testing or losing access to elements of public life.

Since New York City made its announcement, San Francisco and New Orleans have followed suit with policies to exclude the unvaccinated from some businesses. Los Angeles is considering similar measures. All are led by Democratic mayors, underscoring the political divide over mandates on vaccines, masks and other measures.

Nevada’s governor enacted a similar policy this week, and the Las Vegas Raiders responded by becoming the first NFL team to require proof of vaccination to attend games in 2021.

The New Orleans program, which requires patrons of restaurants, gyms, bars and event venues to produce proof of vaccination or a recent negative test, took effect Monday, but enforcement won’t begin until next week.

The Museum of Modern Art was not requiring visitors to show proof of vaccination Tuesday A ticket agent said he didn’t know when the requirement would start.

Avner Balkany, visiting from Israel, said he was unaware of the new rules but would have been prepared anyway, reaching for his wallet to show his vaccination card.

“We have to persuade as many people as possible to get vaccinated,” he said. “I know this is problematic — people’s rights — but, still, this is an emergency, In an emergency, you have to take aggressive measures.”

A $10 million media blitz was also launching Tuesday as part of the city’s visitor outreach. The mayor also announced that about 100 vaccination sites will pop up at such places as gyms and that the city would send out over 600 canvassers to help.

Leon Ellis, the owner of Chocolate, a restaurant in Harlem, said the sacrifices are needed to keep the virus from wreaking more havoc on businesses.

“This COVID is a big deal. So we need to do everything that we can to make sure that we get it in check,” he said. “Whatever the guidelines are, we will comply.”