MSNBC FAKE NEWS: They Tried to Blame the Capitol Attack on a White Guy…And Got Wrecked For It 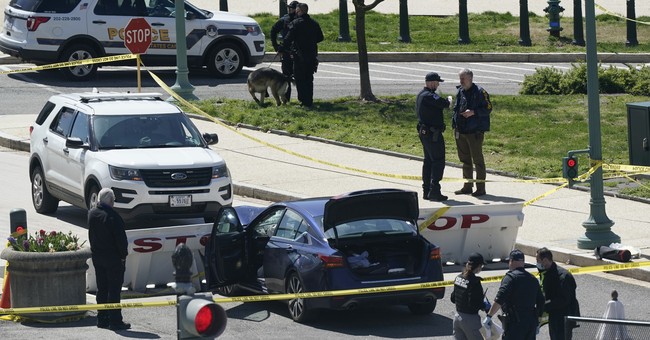 Leah covered this yesterday. One man decided to ram some barricades and attack Capitol Police in Washington DC. Once again, the Hill was on total lockdown. Two police officers were initially reported injured after their confrontation with the suspect, who later exited his car with a knife and rushed officers. He was shot and killed. One officer later died of his injuries. Yet, before we could even get to why this happened, the Left was out in force trying to blame this on Donald Trump and white dudes. It happened again. And guess what else happened again? They ate the pavement for being totally wrong.

I’ve never seen a more eager group of idiots play the “guess who” game with these sorts of stories and get it so completely and utterly wrong. The suspect was very, very, nonwhite, by the way. His name was Noah Green, a black man, and Nation of Islam supporter. Does that sound like the Ku Klux Klan to you, liberal America? Also, take a bow, MSNBC. You just peddled total fake news about this tragic incident (via Fox News)

MSNBC erroneously reported Friday that the suspect in Friday’s deadly car attack at the U.S. Capitol was a “White male.”

“The question now is, what’s the condition of the Capitol Police officers who were injured when the man — we’re told it was a White male that was driving the car —  when the man got out of the car and attacked the police officers with a knife,” Williams told MSNBC anchor Katy Tur.

Green allegedly slammed his sedan into two police officers near the Capitol’s North Barricade, an entrance where members of Congress and their aides come and go from the Capitol building.

Sources told Fox News the attack appeared to be of the “lone wolf” variety and added that the suspect identified himself on Facebook as a Nation of Islam follower who may have recently lost his job.

Green’s Facebook page, which has since been taken down, included photos and videos of Nation of Islam rallies, and the bio identified Green as a “Follower of Farrakhan.”

This story will be out of the news quickly. Our friends at Twitchy noted the very obvious reason why this attack was not trending on social media. As soon as Green’s race was identified, the sweeping under the rug protocols were engaged. Meanwhile, there’s another mess of tweets of liberals just embarrassing themselves—again—for playing this game.