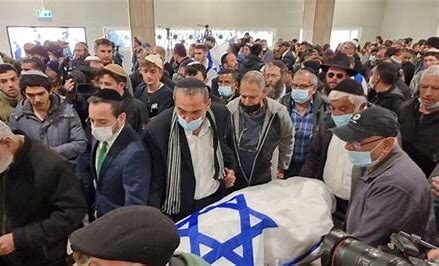 Menachem Yehezkel Menuhin, 67, is laid to rest in his hometown of Be’er Sheva, one day after he was murdered by an Israeli Arab terrorist.

Menachem Yehezkel Menuhin, a 67-year-old resident of Be’er Sheva, was murdered Tuesday by an Israeli Arab terrorist in a stabbing-ramming attack in the city.

Menuhin was laid to rest Wednesday in Be’er Sheva, in a funeral marked by overwhelming grief and anger.

Yehezkel’s brother eulogized at the funeral: “You were murdered by a vicious person just because you were a Jew. We immigrated to Israel from India, we came to Be’er Sheva. You were a simple, humble, observant [Jew].”

Be’er Sheva Mayor Ruvik Danilovich said at Yehezkel’s funeral: “My city is stained with blood. The blood of our brothers and sisters. Those who have dedicated their entire lives to the Zionist enterprise, to settle here in the Negev. Those who have done no evil. But this is not the time to make accountings.”

Minister of Education Yifat Shasha-Biton (New Hope) attended the funeral and said: “There are no words to describe the magnitude of the tragedy. I would like to thank the heroes who shot the terrorist and prevented further carnage from being committed.”

“I also know that the security forces will continue to do everything possible, with determination and without hesitation, to bring those who assisted or participated in this brutal murder to justice, as applies to all terror attacks.

“These are difficult days for the State of Israel and for the city of Be’er Sheva, but they will not frighten us. We will not submit to the murderous terrorists. We will continue to protect the security of the citizens of Israel.”

Some participants at the funeral raged against the Minister of Education, cursing at her and saying, “His blood on your hands … because of you, we bury people.” Police had to remove Shasha-Biton from the scene.

At 5:00p.m., the funeral procession of Laura Yitzhak was held. Yitzhak was 43 years old at the time of her death and was stabbed to death at the gas station. The funeral of another victim, Rabbi Moshe Kravitzky, began at 7:00p.m. in Be’er Sheva’s new cemetery.