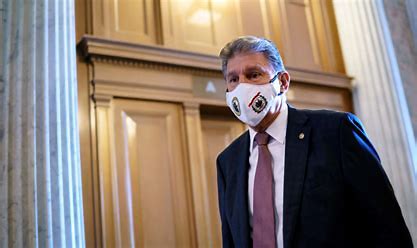 WASHINGTON — Sen. Joe Manchin, D-W.Va., reiterated Sunday that he opposed the Democrats’ $3.5 trillion budget reconciliation package as the party pushes to pass it and a bipartisan infrastructure bill amid packed September negotiations.

Senate Majority Leader Chuck Schumer, D-N.Y., “will not have my vote on the 3.5,” Manchin said during a Sunday interview with CNN’s “State of the Union.”

Manchin confirmed he is a “hard no” on supporting the package during an interview with NBC News’ “Meet the Press.”

While he declined to outline his upper limit for potential spending, the senator said, “it’s not going to be at three and a half, I can assure you” told CNN.

“No, it’s absolutely not acceptable to me,” Sanders said on CNN. “I don’t think it’s acceptable for the president, to the American people, with the overwhelming majority of the people in the Democratic caucus.”

Manchin explained his position by saying there was not a need to move so quickly.

“The urgency — I can’t understand why we can’t take time to deliberate on this and work,” Manchin told ABC News’ “This Week.” He called several of the policies in the package “social reform” that didn’t merit the same immediate action as did the stimulus package Democrats passed the spring.

“I’m just saying that we should be looking at everything, and we’re not. We don’t have the need to rush into this and get it done within one week because there’s some deadline we’re meeting, or someone’s going to fall through the cracks,” Manchin told NBC News.

What’s in the $3.5 trillion reconciliation bill?

In the spring, President Joe Biden proposed two major policy packages, one focusing primarily on infrastructure, climate and jobs proposals and another on social welfare proposals like healthcare, child care and education.

That framework evolved over the summer into a deal focused on infrastructure projects, which Democrats reached with some Republican support in early August.

Manchin further added that there was “no way” that lawmakers could broker a deal on the reconciliation package by Sept. 27, a deadline House Speaker Nancy Pelosi, D-Calif., set for the lower chamber to vote on the separate bipartisan infrastructure package.

Sanders argued “agreements had been made” about the process by which Democrats would pass both a bipartisan infrastructure bill and a larger social spending package, which Manchin and other moderates were now reneging on.

“We want a physical infrastructure, we have to rebuild our roads and our bridges … human infrastructure is more important,” Sanders argued. “We have got to do that in this unprecedented moment in American history, two bills go together.”

Divergent politics in a search for compromise

Manchin and Sanders, who in many ways represent the ideological poles of the Democratic Party, have papered over their ideological differences for the sake of Biden’s agenda in multiple cases this year.

Whether the reconciliation package represents the limits of their cooperation will become evident in the coming weeks.

Sanders, an independent who chairs the influential Senate Budget Committee, holds significant sway over how the budget reconciliation proposal is crafted. The senator’s team says it is in frequent communication with congressional leadership and the White House.

As a committed moderate in an evenly divided upper chamber, Manchin by contrast is often the deciding vote on partisan matters like Democrats’ $2.1 trillion pandemic stimulus package and the confirmations of executive branch leaders.

Sanders contended that Manchin’s position was out of step with the longstanding and future needs of the country.

“I happen to think that Joe Manchin is right. Physical infrastructure is terribly important. But I happen to think that the needs of the human beings of our country, working families, the children, the elderly, the poor are even more important, and we can and must do both,” Sanders said during an interview to ABC News’ “This Week.”

In a September op-ed for the Wall Street Journal, Manchin wrote that he could not support the reconciliation package, citing concerns over the federal government’s debt and rising inflation.

Sanders remained confident, however, the party would still pass both the bipartisan infrastructure package and Democrats’ reconciliation bill.

“I think we’re gonna work it out, but it would really be a terrible, terrible shame for the American people if both bills went down,” Sanders said on ABC News.

“At the end of the day, I believe we’re going to pass them both,” he told CNN.