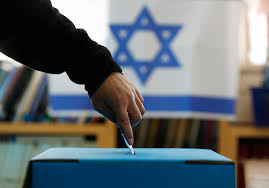 The rise in fence-sitters is across the board, but most prevalent in the Center and less severe on the Right.

Israel is just a day away from heading into its fourth election, but the number of Israelis sitting on the fence has grown since the last round of voting, a new study has found. The Israel Democracy Institute (IDI) study found that the rise in indecision has increased across the board, but was especially prevalent among centrists, with 34% still unsure of who they’ll vote for on Election Day compared to just 8% before the March 2020 election.

The Left also has seen a rise, jumping from 9% ahead of March 2020 to 19% today. The Right has the lowest level of indecision, at just 14%, but that is still a notable rise from the 8% before March 2020. As for the reasons behind this uncertainty, the study finds that it varies across the spectrum. In the center, for instance, the study credited the “traumatic shattering of the hopes placed in the Blue and White Party” for the current high degree of indecision.

Several of these voters seem to be inclined to vote for Gideon Sa’ar’s New Hope Party in a bid to oust Prime Minister Benjamin Netanyahu, but his right-wing alignment is still a cause for concern. Regarding the Left, the fact that only two Jewish parties – Labor and Meretz – exist means the split in votes is not as pronounced as in the center, but both parties are floundering in the polls. The study credits this to the candidate list as being “not particularly appetizing” and for neither party offering any new message or solutions. And of course, the fact that neither party will play a role in making a feasible coalition has caused many voters to consider other options, such as Yair Lapid’s Yesh Atid.

Indecision on the Right seems to have a far more obvious reason behind it. The sheer volume of competing parties appear to be eating away at each other, with Likud, New Hope, Yamina, Religious Zionist Party and Yisrael Beytenu vying for votes along the Right. But while it is possible that uncertainty will decline on Election Day, another possibility posited by the study suggests that undecided voters could simply opt to stay home and not vote at all. This, the study argues, “will undercut the legitimacy of any future government.” These findings come after the final pre-Election Day polls, all of which have suggested that the political deadlock will only continue as neither the pro- or anti-Netanyahu blocs are expected to have the 61 seats needed to form a coalition.