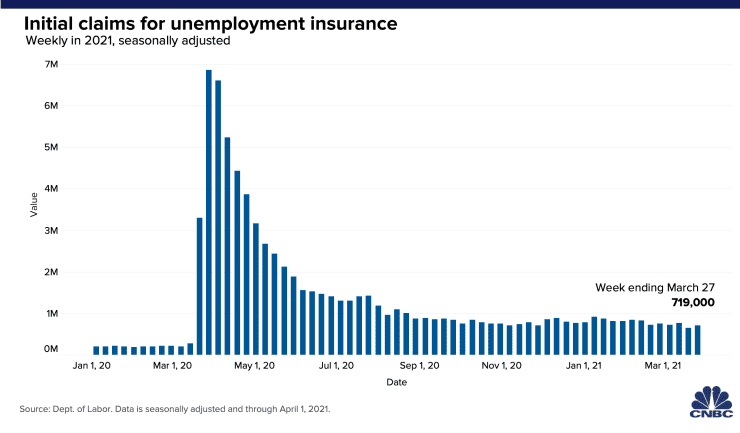 This After Joe Biden says in His Presser, ‘we are at the lowest unemployment Since Covid Began

The number of Americans filing new unemployment claims increased to 719,000 last week, even as the economy continues to slowly recover from the coronavirus pandemic, according to the Department of Labor.

Roughly 18.2 million Americans continue to collect unemployment benefits, according to the report.

“If we can really get the virus under control, then we would expect to continue strong payrolls and at least one, if not two, really strong months of upside,” Constance Hunter, chief economist at KPMG, told the WSJ.

The U.S. added 379,000 jobs in February, a positive sign that the economy is recovering, according to Department of Labor data. The U.S. lost 140,000 jobs in December, the first jobs loss since April, and gained a modest 49,000 jobs in January.

The economy shrank 3.5% in 2020, according to a Jan. 28 Bureau of Economic Analysis report, the worst performance since the 1940s. However, the Organization for Economic Cooperation and Development projected that U.S. gross domestic product would surge 6.5% in 2021.

“President Biden’s American Jobs Plan is a historic investment in the working people of America,” Secretary of Labor Marty Walsh said in a statement. “It will create millions of good paying, family sustaining jobs that rebuild the middle class by empowering our workers to build America’s future.”

Jobless claims hovered around 200,000 per week before the pandemic, according to The WSJ.

Average coronavirus cases and deaths per million have declined in the last two months, according to Centers for Disease Control and Prevention. On Wednesday, the U.S. reported 807 new coronavirus-related deaths and 62,726 new cases.