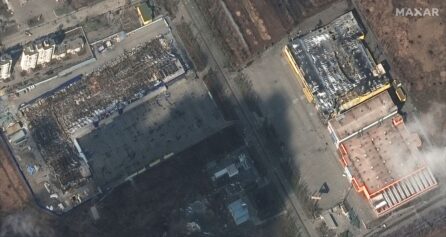 * A Kremlin spokesman said: “Russian forces do not fire on civilian targets” and blamed Ukraine for the failure of a planned evacuation from Mariupol.

* Around 35,000 people were evacuated through humanitarian corridors from three cities on Wednesday, Ukrainian President Volodymyr Zelenskiy said. Local officials said civilians had left Sumy in the east and Enerhodar in the south.

* Another six escape routes are planned for Thursday, according to Zelenskiy.

* Over 2 million people have fled Ukraine since the invasion began two weeks ago, the U.N. said.

* Ukraine’s nuclear power plant operator said it was concerned for safety at Chernobyl, mothballed site of the 1986 nuclear disaster, after a power cut caused by the fighting. It warned of a potential radiation leak if the outage continued, although the U.N. nuclear watchdog saw no critical impact on safety.

* The watchdog said it had lost touch with remote monitoring systems at the Zaporizhzhia nuclear power plant, where there were clashes and a fire last week. Both plants are being held by Russian forces.

* The Kremlin accused the United States of declaring an economic war on Russia that was sowing mayhem through energy markets, and said it was considering its response to a U.S. ban on imports of Russian energy.

* The European Union announced more sanctions against oligarchs and lenders in Russia and Belarus.

* Nestle, Philip Morris and Sony joined the list of multinationals stepping back from Russia. read more

* Russian Foreign Minister Sergei Lavrov arrived in Turkey for talks with his Ukrainian counterpart Dmytro Kuleba, but Kuleba said his expectations were “low.”

* The United Nations said it had verified 516 civilian deaths and 908 injuries since the conflict began, but the true toll was likely to be “considerably higher.”

* Ukraine says its forces have killed more than 11,000 Russian troops. Russia has confirmed about 500 losses. Neither side has disclosed Ukrainian casualties.

* The U.S. Congress agreed to allocate $13.6 billion in emergency aid for Ukraine, alongside a separate package for pandemic relief.