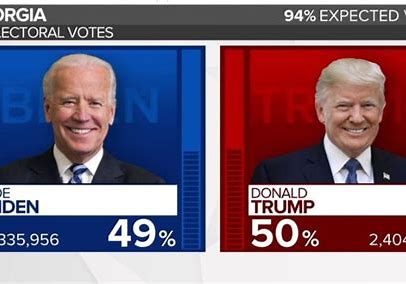 Approximately 385 of 1,565 transfer forms for absentee ballots were missing. What does this mean? Read On! But in short, those 385 transfer forms represent a minimum of 18,901 ballots. Biden won the state by 12,000. If those were Trump Ballots, Biden lost.

A Fulton County, Georgia, election official, has acknowledged that chain-of-custody documents for absentee ballots deposited into drop boxes for the 2020 election are “missing” or “misplaced.”

“We noticed that a few forms are missing,” Mariska Bodison, the board secretary of Fulton County Registration & Elections, last week told The Georgia Star News. She also said procedural paperwork “may have been misplaced.”

Bodison’s comment appears to mark the first time an election official at either the state or county level in a battleground state has admitted an error in election procedure for the 2020 election.

The Star analyzed transfer forms of ballots deposited in drop boxes in the county during the 2020 election. Through open records requests, the newspaper found 385 out of an estimated 1,565 transfer forms were missing.

Transfer forms are documents signed by ballot collection teams that indicate the date, time, location, and the number of ballots collected from each absentee ballot drop-off location.

The transfer forms purportedly provided chain of custody documentation for 18,901 ballots, 6,000 ballots more than the 12,000 vote margin with which Biden won the state in the 2020 presidential election.

Bodison said the error occurred when 25 personal were quarantined due to COVID-19 resulting in the missing paperwork.