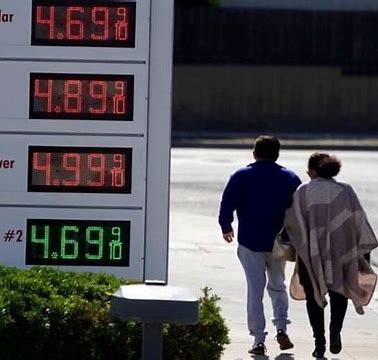 U.S. gas prices, currently hovering at around $3.5 per gallon, could soon double to $7 as pressure mounts between Ukraine and Russia, an energy expert predicts.

After slipping below $20 per barrel in April 2020, crude oil is currently trading at around $91 per barrel. For this year, oil prices have surged by roughly 16 percent. At U.S. gas stations, customers are currently paying $3.53 on average for a gallon of regular gas, up 6.46 percent from a month ago and 37 percent from a year ago, Feb. 18 data from AAA shows.

Russia is estimated to supply around 10 million barrels of oil per day, which roughly equals 10 percent of worldwide demand. If Russian oil supplies were disrupted due to Moscow’s incursion into Ukraine, it would tighten the international oil market further, adding upward pressure on oil prices.

Linda Thomas-Greenfield, the U.S. ambassador to the United Nations, recently warned reporters that the “evidence on the ground” points to Russia preparing for an “imminent invasion.”

In Ukraine, shelling has been reported between government forces and pro-Moscow separatists. Russia has amassed around 150,000 troops along its border with Ukraine. Meanwhile, the Organization of Petroleum Exporting Countries (OPEC) has shown little interest in increasing oil supplies, adding to the rise in prices.

America’s average gas prices have climbed for seven straight weeks according to a recent report by GasBuddy, a real-time monitor of fuel prices. The national average gas price rose by 16.5 cents from a month back, while diesel prices increased by 8.9 percent in a week to hit $3.87 per gallon, the highest since July 2014.

“Not only are oil prices up, but the bulk of the nation is starting the multi-month transition to summer gasoline, further adding to the rise at the pump,” said Patrick De Haan, head of petroleum analysis at GasBuddy.

“In addition, cold weather in Texas last week caused some power outages at major refineries, further weighing on markets. I see no other potentials in the short term but additional price increases unless Russia does an about-face on Ukraine. Even then, we’ll still see seasonality push prices up.”

The White House is reportedly considering a gas tax holiday. At present, Americans pay 18.4 cents in federal taxes for every gallon of gas. In addition, they also pay state taxes. A gas tax holiday will temporarily put a pause to such collections.

Democrat Senators have introduced legislation for such tax suspensions. Republicans accuse the proposal of being a political move ahead of elections. Sen. John Thune (R-S.D.) warned that such “quick go-to” solutions fail to resolve the “fundamental issue” of the supply chain crisis which is behind the increase in prices.