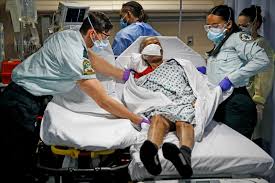 Governor Cuomo is questioned for finding the time to write a book during the height of a global health crisis at a rally for grieving families of nursing home COVID-19 victims outside the Cobble Hill Health Center in Brooklyn last October. (AP)

Family members of New York seniors who died of COVID-19 are calling for Gov. Andrew Cuomo to donate the proceeds from the book he wrote touting his pandemic response.

“The best-case scenario is the profits go to a fund for the grieving families,” Daniel Arbeeny told Fox News. “There should be a fund set up.”

Arbeeny said his 89-year-old father died because the coronavirus was introduced into his nursing home. Cuomo mandated that long-term care facilities take in COVID-19 patients, despite early intelligence saying the elderly were the most vulnerable to severe cases.

Amid the public’s economic and medical travails, Cuomo wrote a book on his response: “American Crisis: Leadership Lessons From the COVID-19 Pandemic.”

“On Page 334, Cuomo writes that New York was No. 46 out of 50 in the nation when it comes to a percentage of deaths in nursing homes; that’s an absolute lie,” Peter Arbeeny, the brother, told Fox News. “He insulted my family, he insulted my intelligence, he insulted the entire city by coming out with a book. That was my call to action.”

The book deal was for a tidy seven-figure sum, according to Vanity Fair, which called it a “blockbuster” amount.

“Losing, in New York State, 15,000 of our most vulnerable and cherished residents, family members, we need a memorial, and that should go to fund the memorial,” Daniel Arbeeny told Fox News.

“A book publisher paid him seven figures and that was all based on a lie. So his pandemic response caused the deaths of thousands of nursing home patients that don’t have a voice.”

In the face of a federal investigation into Cuomo’s administration amid reports of a cover-up of death totals from long-term care facilities, Crown Publishing Group said it has “paused active support” for the book, according to Fox News.

“I think it would be nice if the money was donated for a fund for families that are dealing with hardship,” Grace Colucci told Fox News, “not necessarily just grieving families.”

“A lot of families in New York City have lost their livelihoods,” Colucci told Fox News. “I actually lost my job last week. They had to lay a number of people off because of the difficulties – they’re struggling with COVID.”

Colucci said Cuomo’s book “should be moved to the fiction section,” calling for an investigation into his administration’s culpability and negligence.

“Especially when the only thing that was known from the beginning was that COVID was more dangerous to the elderly and the immune deficient,” she told Fox News. “Do I think he deserved a seven-figure book deal? Not on the basis of what the book’s about.”

Sales of Cuomo’s book have fallen since the reports of his administration’s alleged cover-up; the price was dropped from $30 to $18 on Amazon, according to the report.