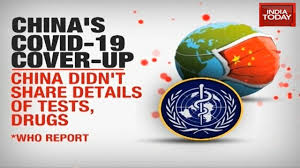 Among those asked for input on document was non-profit director who channeled NIH grant funds to Wuhan Institute of Virology to study “emergence potential” of coronaviruses — and later served on WHO team that rejected theory that SARS-Cov-2 escaped from lab.Image

Emails obtained through an open records request show that several top scientists declined in an early statement about the origins of SARS-Cov-2 to acknowledge the possibility that the virus had escaped from a lab, a scenario that many disease experts still consider highly plausible.

In February of 2020, the White House Office of Science and Technology Policy directed the National Academies of Sciences, Engineering, and Medicine to “rapidly examine the information and data needed to help determine the origins of the novel coronavirus that is causing a global outbreak of respiratory illness.”

At the time, the full extent of the COVID-19 pandemic was unknown, though it had spread to most major countries and had resulted in hundreds of deaths worldwide. Scientists were scrambling to determine the virus’s geographical and biological origins in an effort to get ahead of its rapid spread.

In their response, the leaders of the several national academies told the OSTP that investigations into the virus’s origin were already underway, and that “additional genomic sequence data from geographically- and temporally-diverse viral samples are needed to determine the origin and evolution of the virus.”

Yet, in an earlier draft, attached to an email sent by National Academies Board on Health Sciences Policy Director Andrew Pope, the response letter offered a more speculative interpretation, advancing a natural-origin theory of the disease while expressly leaving open the possibility that it escaped from a lab in some form.

“The initial views of the experts is that the available genomic data are consistent with natural evolution [of the virus],” the draft letter states, “and that there is currently no evidence that the virus was engineered to spread more quickly among humans.”

Yet a footnote to that sentence suggests that the writers might “possibly add [a] brief explanation that this does not preclude an unintentional release from a laboratory studying the evolution of related coronaviruses.”

Nearly all of the experts who were contacted by Pope for input on the draft letter also did not respond to requests for comment.

Aravinda Chakravarti, a professor of medicine at New York University and the director of the school’s Center for Human Genetics and Genomics, told Just the News: “I was involved in the draft as a consultant but not the final letter and so do not know who edited the final text.”

Debate has raged over the past 15 months regarding the origins of SARS-Cov-2, with many experts pointing to the strong possibility that it emerged from China’s Wuhan Institute of Virology, a coronavirus-focused infectious disease lab located just a few miles from the wet market the communist Chinese government claims was the site of the initial outbreak of the disease.

A team of World Health Organization researchers concluded in February that it was “extremely unlikely” that the virus had escaped from a laboratory in China. Yet numerous scientists have warned that the WHO investigation was flawed and that the lab-leak theory is still a credible one.

Controversially, one of the members of the WHO team was Peter Daszak, the director of the New York-based science nonprofit EcoHealth Alliance. Daszak for years had funneled federal grant money to the Wuhan Institute of Virology to support a lengthy series of experiments involving the “emergence potential” of coronaviruses.

Daszak was among the individuals asked to edit the early draft of the National Academies response letter. He did not respond to a request for comment, though email tracking showed he read the query shortly after it was sent on Friday.