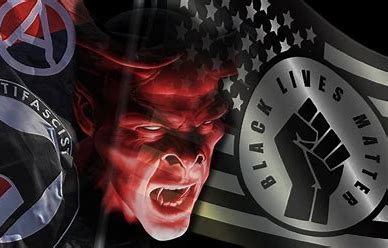 Over the past year, we’ve seen some very violent and/or out-of-control encounters because of the dangerous habit that the BLM has trying to block the street and stop drivers from going through a ‘protest’ area.

We reported on an incident in Plano, Texas, where there was an armed standoff and the police seemed more disturbed with the driver than they were the crazies blocking all the cars in the road.

But, that was just one of many. BLM does this all over the country.

On Thursday afternoon in Portland, they severely injured a handyman, Joseph Hall, who was unlucky enough to turn into a street where one of their ‘protests’ was, according to the NY Post. Hall said he was coming home from a repair job nearby when he was cut off by a moped. Then the moped followed him and the BLM folks converged to stop his truck to cut off his truck. As you can see from the video, multiple BLM folks were armed.https://www.youtube.com/embed/ER5xYn1wRWI?feature=oembed

“They’re screaming and yelling at me, claiming I was out there trying to run people over. That’s when I discovered a march was going on,” Hall told the Post. “I was trapped. A vehicle in front of me trapped me in. I couldn’t go forward or around.”

As the above video shows, after BLM started shoving him around, he pulled a gun to ward them off. But when a BLM person pointed a rifle at him, he raised his gun. That’s when someone jumped him from behind. Then they all jumped on him.

As Hall explained to KPTV Fox 12, he ended up with a partially collapsed lung, two lower vertebrae fractured, 5 broken ribs, a broken collar bone, and head trauma. They also took his gun. Hall said he stood his ground and he would “do it all over again.” Except I’m thinking this time he wouldn’t turn his back to any of them.https://www.youtube.com/embed/Zmb_LeFg4SM?feature=oembed

But Hall said he’s had enough of Portland, and he’s done; he’s moving out. It’s surprising that anyone would stay, when police don’t seem to want to stop this kind of behavior.

Notice what the KPTV folks don’t say. They don’t say the name of the marchers who attacked Hall; they don’t describe them as BLM.

Hall wasn’t the only person who was harassed that day. Police received 911 calls from other motorists at other intersections who were also harassed. “One person said people in the crowd broke out their vehicle windows, damaged tires, and sprayed them with some kind of irritant,” the police said, according to the NY Post.