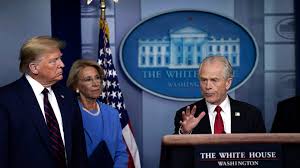 Navarro discussed the “rot in the Biden economy” on War Room, Monday evening. The combination of open borders with the effects of lock downs on the economy will destroy the remnants of the Trump economy.

“We’ve got severe structural unemployment, meaning that there’s been so many people laid off in the pandemic in industries that ain’t coming back,” he said. In addition, Navarro said he agrees with Steve Cortes on the bond market, and says inflation is coming.

“The bond market is in revolt now,” Navarro said. “They see all this money washing around, and basically if I think there’s going to be inflation in a year, I’m not buying bonds I’m waiting. And what does that do? It depresses demand for bonds and drives up the yield. That’s where we’re at.”

Navarro said decoupling with China is the solution.

“We have to get off this addiction to the Chinese economy because they are literally killing us with their virus, they’re getting ready to kill us with their military, they flood our factories, they steal our jobs,” he said. “And it would be nice to see a Democrat administration which is supposed to support Blue Collar America…get that memo.”